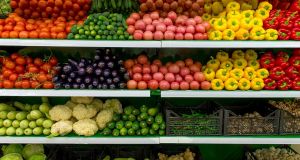 Dole is one of the world’s leading producers, marketers and distributors of fresh fruit and vegetables. Photograph: iStock

Irish food group Total Produce is expected to exercise its right to purchase all the shares in US-based Dole Food Company within five years, having acquired an initial 45 per cent stake for $300 million in cash (€242 million) on Thursday.

The Dublin-based fresh produce company said it was a significant step in its history, bringing together two global brands and creating the world’s leading fruit and vegetable group.

The company said a total of 63 million new ordinary shares in Total Produce had been placed by Goldman Sachs International and Irish stockbroker Davy at €2.30 per share. This represented about 19 per cent of the company’s issued ordinary share capital and raised gross proceeds of €145 million.

In 2017, Dole’s revenue was just under $4.5 billion. It is one of the world’s leading producers, marketers and distributors of fresh fruit and vegetables. Dole provides retail, wholesale and foodservice customers around the world.

Ironically, the US company looked at acquiring Irish rival Fyffes in 1993. Total Produce was then spun out of Fyffes in late 2006.

At the time, Fyffes was controlled by members of the McCann family here, some of whom are now involved in Total Produce.

The Irish company is buying the stake from current Dole chairman David Murdock, who will stay on as chairman of the group, with Total Produce chairman Carl McCann as vice chairman.

The Dole management team will continue to operate the business, Total Produce said in a statement.

This would give it a controlling stake of 51 per cent for $312 million. Total Produce said it has no intention of acquiring this stake at present.

If the Irish company fails to exercise this right, from the fifth anniversary onwards, Mr Murdock is permitted to “cause a process to market and sell 100 per cent of Dole common stock”.

It is understood that Mr Dole, who is 94, travelled to Ireland this week to sign the deal.

Total Produce will have “balanced governance rights” along with Mr Murdock following the completion of the first tranche of this year.

The board of directors of Dole will comprise six members, three from each side.

“We are delighted to have signed an agreement with Dole, long held in the highest regard as one of the world’s best fresh produce companies, with iconic brands dating back to 1851,” Mr McCann said in a statement. “I believe that this investment by Total Produce in Dole is the single most positive step in our company’s history. It places Total Produce at the forefront of our industry, and we anticipate it will create significant additional value for shareholders in the years ahead.”

The Irish food distributor has been on the acquisition trail of late, particularly in North America.

Total Produce has been increasing its presence in North America recently. Its most recent acquisition was a 50 per cent stake in a California company, The Fresh Connection, which was announced in November.

In March, the company announced it had upped its stake in Canadian firm Grandview Ventures to 65 per cent, and last year it also acquired a 65 per cent share in Los Angeles-based Progressive Produce.

The deal with Dole is subject to anti-trust review in a limited number of jurisdictions, and is expected to close by the middle of 2018.

Shares in Total Produce rose more than 6 per cent in Dublin following the announcment of the transaction.