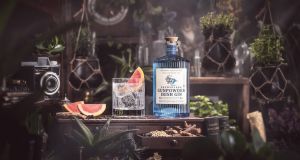 Gin was the fastest-growing spirit locally in 2016, growing 31.6% in Ireland

Irish craft gin is set to go global this year as local brands seek to go head-to-head with the likes of Bombay Sapphire, Hendrick’s and Tanqueray.

A new forecast from the Alcohol Beverage Federation of Ireland (ABFI) suggests that, while last year marked a breakthrough for Irish gin makers, 2018 will see brands such as Bertha’s Revenge, Shortcross, Blackwater No 5, Dingle and Gunpowder really taking on the competition by growing sales significantly in the US, Canadian, British and German markets.

The federation estimates there are as many as 30 gin brands now in Ireland. Gin was the fastest-growing spirit locally in 2016, rising 31.6 per cent in Ireland while exports more than trebled.

Globally, sales of gin rose 2.5 per cent that year to 52 million cases on the back of a revival fuelled by premium brands such as Monkey 47 and Caorunn.

Overall, Irish drinks exports rose 8 per cent last year to €1.5 billion with the outlook for 2018 also positive, due in part to the phenomenal growth recorded in whiskey exports, which were 11.3 per cent ahead in 2016 alone, to reach 8.7 million cases. That puts the sector on target to exceed a 2020 target for sales of 12 million cases.

According to the lobby group’s forecast, whiskey sales will continue to grow this year aided by the introduction of new stock.

Since 2014, the number of operational Irish distilleries has risen from four to 18, with a further 16 planned. With a minimum three-year and one day lag between distilling and sale, the first home-distilled stock coming from these distilleries is expected to hit markets later this year

Along with a rise in exports, the whiskey renaissance has also helped boost tourism locally, with an increasing number of distilleries opening up visitor centres.

While the federation’s forecast is largely positive, it has warned increased costs associated with measures in the Public Health (Alcohol) Bill, such as health warnings on bottles and cans, will harm small local producers and new entrants.