Guinness sales rise 4% globally, though spirits are the stars in second half of 2017 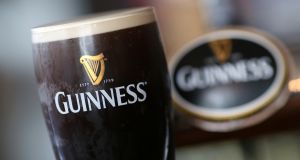 A revival of the classic cocktail in its North America market helped Guinness-maker Diageo to a sparkling performance in the second half of last year, while sales of the black stuff rose 4 per cent globally.

Sales of Johnnie Walker whisky rose 7 per cent, while Tanqueray gin was up 16 per cent, and Baileys and Captain Morgan were both up 6 per cent. Net sales of Smirnoff vodka were down 1 per cent.

Diageo’s net sales in Ireland. Guinness grew 1 per cent in this market, helped by the success of Hop House 13 lager and the launch of the “Behind Every Town” campaign, but this performance was offset by a 3 per cent decline in the net sales of Diageo’s other beer brands.

Meanwhile, net sales of spirits in Ireland rose 13 per cent, largely driven by the strong performance in Gordon’s and Tanqueray.

The distiller said it is confident of achieving its medium-term targets for sales growth and improvement in operating margin through June 2019. Diageo has also joined other consumer-product companies, such as Unilever and Nestle, in cutting costs and boosting productivity as activist investors take a growing interest in the sector.

In Europe, net sales rose 4 per cent, boosted by sales of Tanqueray, the launch of Gordon’s pink gin and a 4 per cent increase for Guinness.

Sales of Johnnie Walker grew 5 per cent in North America, while Diageo reported market share gains for Bulleit bourbon and Canadian whisky Crown Royal. Vodka sales in the region fell 8 per cent, however, hurt by weakness in the Ciroc and Ketel One brands.

The company said marketing spend rose 7 per cent in the period, as it works to improve performance of scotch, its key product, and its weak US vodka sales. It said rising marketing spend in Europe had focused on “key growth opportunities” for Guinness and Johnnie Walker in the region.

Diageo warned that exchange-rate movements for the year ending June 30th will cut net sales by approximately £460 million (€527.6 million) and operating profit by about £60 million.

Last year, the company agreed to buy Casamigos, a tequila backed by the actor George Clooney, in a deal worth as much as $1 billion. It’s also re-entered the Irish whiskey category, in which it hadn’t competed since selling Bushmills to Jose Cuervo in 2014.