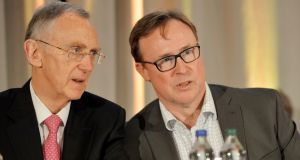 Speciality baker Aryzta has cut its 2018 core profit forecast sharply due to ongoing weakness in European and US markets, knocking its shares by as much as 22 per cent.

The Swiss-Irish company’s warning comes two weeks after it announced the appointment of a new chief in North America, where issues with undocumented workers and a failed strategy led to a $1 billion net loss in 2017.

Aryzta, whose brands include Otis Spunkmeyer and Cuisine de France, said it expects full-year earnings before interest, tax, depreciation and amortisation (Ebitda) to fall by 15 per cent on a like-for-like basis. In November Aryzta forecast 2018 Ebitda to be broadly in line with last year.

Chief Executive Kevin Toland took over only in September last year as part of sweeping changes at the top of Aryzta and analysts said the profit warning was a blow to the new team. Baader Helvea analyst Andreas von Arx said the credibility of the new management “took a crack”, while Kepler Cheuvreux analyst Jon Cox said in a note that the profit warning was “particularly painful” as it was under their watch.

Mr Von Arx said it was the magnitude of the Ebitda shortfall that had been a surprise and not the fact that it would be behind 2017, adding that he expects

Closer to home, Investec analyst Ian Hunter noted that the company’s underlying business is under pressure as it struggles to get cost cuts through as quickly as the management team had anticipated.

While Mr Hunter doesn’t expect core parts of the business to be sold off, he said that either Cloverhill or the company’s Picard stake will have to be sold to ease balance sheet concerns. He suggested that a lot of private companies working in the same space as Cloverhill could be looking for additional capacity.

Aryzta’s shares were down 19.7 per cent to €25.89 in Dublin in late afternoon trading and were heading for their worst single-day percentage decline since January 24th, 2017, the day it issued a major profit warning for last fiscal year.

Aryzta said underperformance in Europe was likely to account for about 20 per cent of the shortfall relative to previous expectations, in stark contrast with its view in November, when it trumpeted broadly based growth across the region.

It said Brexit-related pressures were hurting its British business and higher distribution and labour costs were denting profit in the United States.

Aryzta is set to announce half year results on March 12th. – Reuters