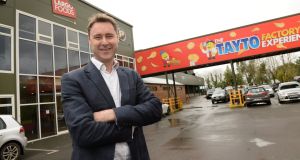 Tayto Snacks is undertaking a €16 million investment programme which will make its factory in Ashbourne, Co Meath more efficient.

The crisp business which owns brands including Tayto, Hunky Dory, Perri and King began its investment in 2018 and it will run to 2020 to “release capacity in our plant and make sure we can fuel our growth agenda,” according to Jeff Swan, the company’s managing director.

“We traditionally had a few bottlenecks in the factory, particularly around packaging crisps and our snacks business, so a large part of the investment, releases a lot of those bottlenecks.”

German-headquartered Intersnack is investing in the business having acquired it from Ray Coyle over a period leading up to 2015. The company had previously invested about €20 million in the Tayto business between 2006 and 2016.

Formerly Largo Foods, the Meath-based Tayto Snacks business is among the best-performing markets by revenue in Intersnack’s business. In 2017, it placed fifth out of 24 countries into which Intersnack has operations with revenue of €88.5 million. The UK, Germany, the Netherlands and France had higher sales figures.

In 2018, the company increased sales by more than 11 per cent to €98.5 million. “We had a good year, we got the kind of growth we’re looking for and the market has had good growth as well,” Mr Swan said.

The Tayto brand itself saw sales grow by 4.2 per cent while the O’Donnell’s brand recorded double-digit growth, according to Mr Swan.

Intersnack is also the owner of KP Snacks in the UK with which Tayto Snacks has developed a new crisp brand called Tayto Muchos. While Muchos are currently being manufactured in the UK, that process could be brought to Meath pending their sales performance in the Irish market.

“We will evaluate installing double sheeted technology in Ashbourne post completion of our current factory upgrade project,” the company added.