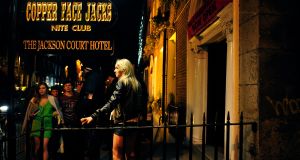 Copper Face Jacks is up for sale and is expected to fetch around €40 million. Photograph: Aidan Crawley

Who is going to buy Coppers?

An institution in Ireland, the venue – which comes with a hotel – is expected to fetch in the region of €40 million.

In reality, that’s a spicy price tag that immediately shuts out a considerable number of prospective buyers who don’t have backers with deep pockets. One such group, Press Up, has already said it’s not interested, and it’s perhaps a bit on the expensive side for existing Dublin hospitality operators such as Charlie Chawke, Louis Fitzgerald or even the Mercantile Group.

Even if it wasn’t, what is for sale is effectively a museum. Sure, it’s extraordinarily profitable – since its foundation it has accumulated profits of more than €75 million and last year alone recorded a pretax profit of €4 million. No shortage of publicans would sell their first born for that type of success.

Additionally, it sits on prime Dublin city centre land. But is it set up for a group to come in and put its stamp on it? It could be argued that the last thing it needs is marketing ‘guru’ types rocking up with a rebrand to CFJ and swing installations galore. As all entertainment business-owners know, consumers are nothing if they’re not fickle. Coppers as it stands has plenty of goodwill attached, but the pub business is unquestionably a cyclical one and fashions change quickly. Of late, what were formerly seen as institutions have had to shut up shop. Think Lillie’s Bordello and the Tivoli.

In this case, it probably makes sense for the purchaser to take the title deeds and run, for as little as a new lighting scheme could destroy the beast. Whether we’ve reached “peak Coppers” is up for debate, but the recently written Paul Howard musical would suggest it’s as popular as ever.

So, who will buy the thing? Cantillon expects it will be a group of investors who are happy to leave it to run as it currently does and recoup their cash within 10 years.

If we turn out to be wrong, it’s hard to see how Coppers remains an institution into the next decade.