Aryzta revenue down 4.2% but group shows signs of stabilisation 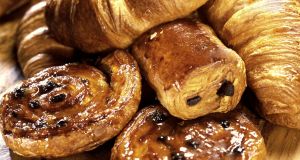 Irish-Swiss baking group Aryzta saw its three-year programme to get the business back on track begin to pay off in the second half of the year, as organic growth provided some evidence of stabilisation.

However, the company still has much left to do and is being negatively affected by Brexit, chief executive Kevin Toland said. Revenue fell 4.2 per cent in the first half of its fiscal year but the company said it was on track to meet guidance for the full year.

Total revenue for the six months to the end of January 2019 was €1.71 billion. The Cuisine de France owner pointed to a 0.7 per cent increase in organic revenue as evidence of ongoing stabilisation, with 1.9 per cent organic growth in its European business and 6.7 per cent growth in revenue for the rest of the world.

The group’s Food Europe sector saw revenues fall 1 per cent year on year to €859.7 million, with a positive performance reported in Switzerland, France and Poland. There were more challenging conditions in the UK and Ireland.

“Between Brexit, uncertainty and currency, that’s been a difficult trading environment, and has been for a period of time,” Mr Toland said. “Our UK business has been impacted by that and also the business from Ireland that exports into the UK. But we’re making our way through that.”

In the US, organic revenues were down 8.7 per cent year on year to €717.9 million, with organic growth down 1.8 per cent. However, analysts at Davy said the margin in North America expanded for the first time since 2014. “We believe a pathway to stabilisation is now emerging at Aryzta,” Cathal Kenny and Roland French wrote in a note.

Underlying net profit was down 22 per cent to €39.5 million. Underlying earnings before interest, taxation, depreciation and amortisation (ebitda) were €151.6 million, down 6 per cent, with the margin stabilising at 8.9 per cent, a decline of 10 basis points. Net debt was €811 million.

During the six months, the company completed a €740 million capital raise that was designed to strengthen its balance sheet. The transformation plan, Project Renew, is targeting operating efficiency and the company’s competitive position. In the first half of 2019 it delivered €7.6 million to the company.

Looking ahead to Brexit, Mr Toland said it was not material in terms of Aryzta’s overall ebitda. “We have some inherent advantages compared to other categories in terms of shelf life and short-term interruption etc doesn’t impact us as heavily except for the cost of time being interrupted than maybe some other food categories.”

He said uncertainty was a risk, but the company had to wait and see what Brexit brought. “The things that are clearer are there’s a large consumer market in the UK, consumers will still want our products, it’s a question of how we effectively serve that markets,” Mr Toland said.

“There has been many false dawns on Brexit; we’ll wait and see what this dawn brings in terms of the Brexit arrangements and what that will mean for underlying consumer confidence and react appropriately.”

1 KBC Ireland fined €18.3m for ‘unconscionable’ tracker scandal role
2 The wealth of the Irish – how do your assets match up?
3 Will Facebook walk away from European market after data protection 'hissy fit'?
4 Dunnes Stores set to enter grocery delivery market
5 Irish company to test vaccines on volunteers deliberately infected with Covid-19
6 Dublin and Cork airports look at setting up pre-flight Covid testing centres
7 Willie Walsh joins CarTrawler as deputy chairman
8 Eir takes on extra staff as ComReg chases it on complaints
9 Bank of Ireland sees more than 1,400 staff apply for redundancy
10 Air travel never going ‘back to way it was’
Real news has value SUBSCRIBE