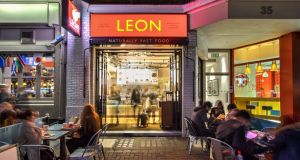 Popular healthy fast-food chain Leon has announced plans to open its first Irish outlet in Temple Bar in May, with a second outlet due to open in Dundrum Town Centre later this year.

Through a franchise partnership, Leon intends to open 20 restaurants across the island of Ireland by 2023, creating 600 jobs in the process.

The company has said its first outlet will open in Temple Bar’s Crown Alley in a premises previously occupied by Eager Beaver vintage clothing store. The space extends to 1,600sq ft over two floors

Its restaurant in Dundrum, meanwhile, is due to occupy 1,886sq ft when it opens in the redeveloped upper Pembroke district area of the shopping centre, near Harvey Nichols.

Having first opened in Carnaby Street in London in 2004, Leon has expanded to 63 restaurant locations, the majority of which are in London with further outlets in Utrecht, Amsterdam and Oslo. Most recently it opened its first US restaurant in Washington DC.

In the Republic, Leon is controlled by Cibus Concepts, a franchise partnership established by Waterford accountant Stuart Fitzgerald and his business partner Brian McIntyre. The group is backed by individual high net worth equity investors, Mr Fitzgerald told The Irish Times.

“Temple Bar is a melting pot of culture, creativity and individuality which makes it the perfect setting for Leon’s Irish launch,” Mr Fitzgerald said.

The primary company was founded by chief executive John Vincent among others and is backed by GP Investments and Active Private Equity.

While Leon will focus its growth over the coming 24 months in Dublin, it intends to expand outside the capital to large urban hubs after that, Mr Fitzgerald said.