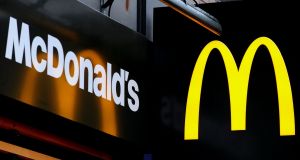 McDonald’s has yet to lodge grounds of appeal with the European Union Intellectual Property Office. Photograph: Rui Vieira/ PA

In the latest round of the brand battle between McDonald’s and Galway-based Supermac’s, the US fast food giant has lodged notice of appeal with the European Union Intellectual Property Office (EUIPO) based in Alicante, Spain.

McDonald’s has yet to lodge grounds of appeal.

It is expected to take at least one year for the EUIPO to decide on the McDonald’s appeal. This will further delay Supermac’s application to have its own trademark registered Europe-wide to enable the business to expand.

That application is being strenuously opposed by McDonald’s, and the EUIPO has told each party in correspondence that the Supermac’s trademark application will not be made until the “Big Mac” trademark cancellation dispute is finalised.

He said the issues concerning the “Big Mac” trademark cancellation was “a sideshow compared to the real prize of getting the Supermac’s brand registered across Europe” for selling fast food.

Mr McDonagh said: “We are at this for four years so one more year doesn’t bother us. I am very confident that we will get the decision on the Supermac’s trademark.”

In January, EUIPO said McDonald’s had not proven genuine use of the contested trademark “Big Mac” as a burger or as a restaurant name.

As part of McDonald’s submission claiming the “proof of use” of the Big Mac, McDonald’s submitted a printout from en.Wikipedia.org, providing information on “Big Mac” hamburger, its history, content and nutritional values in different countries.

Separately, McDonald’s also claimed significant sales figures in relation to “Big Mac” sandwiches for the period between 2011 and 2016 along with brochures and printouts of advertising posters, in German, French and English, showing “Big Mac” meat sandwiches.

In its detailed ruling, the EUIPO stated that having examined the material listed in its entirety, the Cancellation Division found that the evidence was insufficient to establish genuine use of the trademark.

A spokesman for McDonald’s in January stated that the EUIPO decision “did not take into account the substantial evidence submitted by McDonald’s proving use of our ‘Big Mac’ mark throughout Europe”.

The spokesman stated that McDonald’s was confident that the decision would be overturned by the EUIPO Board of Appeals.

On its “Big Mac” burger, the spokesman said: “We have a range of intellectual property protection across the brand at an EU and national level and this remains unaffected by the recent EUIPO decision.”