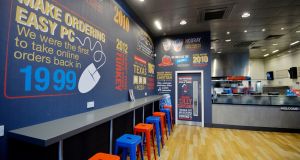 The Caldwell family from Northern Ireland will retain majority control of Shorecal, which operates almost 30 Domino’s outlets on the island. Photograph: Alan Betson

The listed company that runs Domino’s in the UK and Ireland says it has agreed to pay €12.5 million for a 15 per cent stake in Shorecal, the pizza chain’s biggest Irish franchisee, valuing the business at about €83 million.

The Caldwell family from Northern Ireland will retain majority control of Shorecal, which operates almost 30 Domino’s outlets on the island.

In addition to the stake sale to Domino Pizza Group (DPG), the family also recently sold about one-third of Shorecal to the Bronfman family from the US, whose wealth was originally derived from the Seagram whiskey company.

DPG says it wants to increase the number of franchised outlets in the Irish market from 50 to about 75 in coming years. Speaking after the release of its full-year results on Tuesday, DPG chief executive David Wild said Shorecal would open about 10 new Irish stores, including six in the Republic.

“Shorecal came to us last year and told us they had been approached by a family office to invest,” said Mr Wild of the initial approach to the Caldwells from the Bronfmans.

“The opportunity was for us to co-invest with the family office. We can see the benefits of this type of patient capital as a form of funding. We may want to do more of this in the UK.”

Shorecal is controlled by brothers Adrian and Charles Caldwell from Belfast. The company had sales in 2017 of more than €49 million, and made net profit of €7.8 million, while its balance sheet shows shareholders’ funds of €32.5 million. Its accounts show the Caldwells took dividends of €12.5 million out of the business over 2016 and 2017.

Mr Wild said he envisaged Irish franchise growth of about 4 outlets per year “once we get really moving”. He suggested that other Irish franchise owners in regional locations may be interested in opening more stores, while the group also appeared to be specifically targeting the Dublin commuter belt.

“Economically speaking, we see Dublin as being on fire. There is a shortage of housing and that is leading to Dublin sprawl. People are commuting into the city from far outside. We want to be a part of serving those people.”

He said the group was coping with the threat from online food delivery aggregators such as Deliveroo and Just Eat and that such ventures had actually helped to expand the market: “Our online orders growth in Ireland is 15 per cent.”

DPG on Tuesday reported group system sales last year of £1.26 billion, which, in addition to the UK and Ireland, also includes a smattering of other territories such as Iceland. Like-for-like sales growth in Ireland was 4 per cent.