Pretax profits down at JD Wetherspoon on higher labour costs 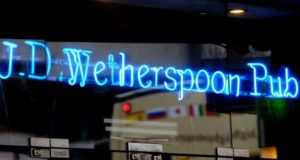 JD Wetherspoon reported a sharp rise in labour costs, which it says rose by about £33 million

Profits at pub chain JD Wetherspoon fell 19 per cent in the first-half due to higher labour costs.

The company announced pretax profits of £50.3 million (€59 million) in the first six months of its financial year, down from £62 million a year earlier.

The FTSE 250-listed group attributed the profit decline to higher labour costs, which rose by about £33 million.

Revenues for the group, which operates five bars in the Republic, climbed 7 per cent over the same period to £889.6 million from £830.4 million with like-for-like sales up 6.3 per cent.

JD Wetherspoon operates about 900 bars across the UK. In the Republic it operates The Three Tun Tavern in Blackrock, The Forty Foot in Dún Laoghaire, The Great Wood in Blanchardstown, The Old Borough in Swords, and the Linen Weaver in Cork city.

It is also planning a “superpub” on Dublin’s Camden Street and another bar on Lower Abbey Street.