'Our worst-case scenario is a WTO trading environment' 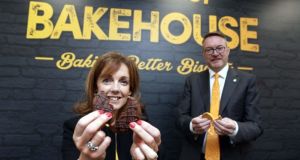 Alison Cowzer runs the Eastcoast Bakehouse in Co Louth with her husband, Michael Carey. The company makes own-brand cookies, available across a wide range of supermarkets, and also engages in contract baking for other brands. The brand is also now exporting its cookies to 25 countries, including in the Middle East and mainland Europe as well as the United States.

I think it was shock. There was always a feeling that sense would prevail but it didn’t.

When we put a business plan together, the focus was, like most Irish businesses, on the UK. We were building a business of scale and we were originally looking to see 80 per cent of our product going to the UK market.

That would not be unusual for Irish producers but that has turned out to be unsustainable. We had to pivot very clearly and look to focus on different areas geographically. We’re now in 25 countries around the world, and with a clearer focus on the Irish market to achieve a position that was more ambitious than we originally intended.

How much do you rely on raw materials or markets north of the Border? And how much on Britain?

For us, north of the Border is not a huge focus. Some of our packaging requirements are purchased in Leeds. At the moment, some packaging is sourced in Ireland and some in the UK. We do have mitigating plans in place. For most of our inputs, that could be more difficult where we have a particular order for a particular ingredient.

On the overall strategic basis, we started thinking right from the vote because we had a shiny new business plan that was 80 per cent focused on the UK. A lot of work was done to focus that elsewhere. We’ve set up some contingency plans and we’ve looked at dual supply in some cases.

We have an ambient product with a shelf life of 12 months. Thankfully we’re not in the fresh food market which is an altogether different scenario. We are looking to expand markets and we’ve been very pleased with the response of the brand in the Irish market, which has exceeded our expectations. [The Republic is] currently buying €5 million a week in biscuits. We certainly have an opportunity both on our brand and on our private label business to replace that with our products.

It all depends on what type of Brexit it is. If they leave under WTO rules, British manufacturers may look for other manufacturing bases outside the UK to service demand which is where we could possibly come in. In terms of scale, we have an 18m-long oven and we can produce 77,000 packets of biscuits in an eight-hour shift. So if there’s a UK factory producing for the French market and they don’t want to lose that, they may well seek to move.

It’s kind of like battening down the hatches for a hurricane and hoping it blows to one side. Because of the uncertainty we’re still waiting and it looks like [Theresa] May is making us wait until the last second to understand. There’s been war gaming in companies trying to get a hold on what this will look like.

Our best-case scenario is that we end up with a longer transition period to give clarity. I think best case would be no Brexit but I don’t think that’s going to happen. Our worst case is a WTO trading environment because it will be a shock to the system and have a major impact on input and sales.

We have certainly stockpiled goods to mitigate potential disruption. In as far as we can, we’ve looked to stockpile ingredients. However, a lot of ingredients come in tankers and one of the major issues in the country at the moment is finding warehouse space. It is very difficult to get outside storage.

I suspect there’ll be less reliance on the UK, if not because of Brexit because the shock to the system has given people a real wake-up call to understand that it isn’t sustainable to have such a focus on one market. That’s hitting home at very small company level. The work to diversify markets, that will bear fruit. We will be still clearly a very open economy but I think we’ll have a broader footprint across the globe.