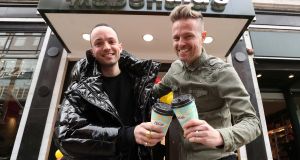 James Kavanagh and Nicky Byrne pictured together at the reopening of McDonald’s flagship restaurant on Grafton Street after a €1.5 million refurbishment

McDonald’s on Grafton Street in Dublin has reopened following a €1.5 million refurbishment.

Despite the increased automation, the restaurant will employ 30 additional staff, bringing its total headcount to 120. It will also have seating space for 305 customers, up from 285.

McDonald’s has been attempting to modernise its business, systematically adding self-service ordering kiosks and table service to stores worldwide.

The burger giant is investing heavily in mobile and other tech platforms in bid to appeal to a younger customer base. Its new McDelivery service was launched in Ireland last year.

The Grafton Street restaurant, which first opened in 1977, was the first McDonald’s in Ireland and remains one of the busiest.

It is operated by franchisee Amir Afsar, who operates 11 McDonald’s franchises in total.

“As the busiest McDonald’s restaurant in Ireland it is important that our customers can access the best family-friendly facilities and services on offer,” Mr Afsar said, noting the new self-order kiosks would allow customers to make more personalised food choices.

The latest set of accounts for Mr Afsar’s outlets show his company made a profit before tax of €1.16 million in 2017, almost double the previous year

As part of the Grafton Street revamp, McDonald’s removed the McCafé element of the store in an apparent strategy reversal.

The Grafton Street outlet was among eight retail investments and five office blocks bought by Irish Life for about €154 million back in 2015.

McDonald’s had been paying an annualised rent of €1.15 million until its lease ran out in March 2011. Following a dispute the rent was adjusted down to €600,000.

There are 92 McDonald’s restaurants in operation in Ireland, 90 per cent of which are owned and operated by 22 Franchisees, employing more than 5,000 staff.

1 Air travel never going ‘back to way it was’
2 Should I switch bank now with Ulster Bank at risk of closing?
3 Will brother’s widow get half of our parents’ estate when they die?
4 Household wealth jumps by 74% since last recession – report
5 Tourism and aviation players demand von der Leyen end EU travel chaos
6 ‘Tax war’ will hit Ireland if digital tax talks fail, OECD says
7 Tánaiste urges businesses to brace for Brexit with 100 days to go
8 House insurance: save yourself money by reviewing your policy
9 EU said to be leaning towards appealing Apple tax decision
10 Pallet manufacturer looks to imports as timber crisis takes root
Real news has value SUBSCRIBE