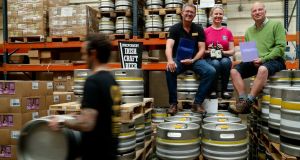 Craft brewers want Minister for Finance Paschal Donohoe to keep a tax break for their industry in next month’s budget.

So-called microbreweries pay half the normal excise rate on their products under reliefs on alcohol tax granted to support their industry. The Independent Craft Brewers of Ireland (ICBI), which represents 34 independent beer makers in the Republic, is asking Mr Donohoe to retain this tax break in the forthcoming budget on October 8th.

The brewers say that the excise relief is key to their industry, which competes with global giants that control 97 per cent of the market .

“Sadly many of our members are battling to survive,” he said, adding that they depended on the excise break.

Barbara Anne from Bridewell Brewery said the industry relied on the relief to compete against “major foreign brands”.