Meat plant being picketed by farmers posts over €3m profit 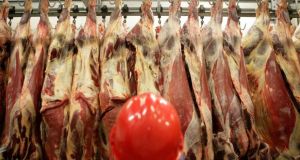 The directors’ report noted they are ‘satisfied with the results for the period and are confident that the group will continue to trade profitably in the coming year’. File photograph: Bloomberg

One of the meat processing plants being picketed by farmers in a protest over beef prices is part of a group that recorded pretax profits of more than €3 million last year.

A picket was mounted on the Slaney Foods plant near Bunclody in Co Wexford on Tuesday night.

The WBL business has since 2016 been jointly owned by Larry Goodman’s ABP Food Group Unlimited and the Northern Ireland-based Linden Foods. The numbers employed by WBL last year totalled 972 with staff costs amounting to more than €33.1 million.

The profits for the holding company last year take account of combined non-cash depreciation and amortisation of €5 million. The WBL business recorded a gross profit of €76.12 million after cost of sales totalled €263.48 million. Distribution costs totalling €52.76 million and administrative expenses amounted to €19.9 million, resulting in an operating profit of €3.4 million.

According to the directors’ report attached to the first set of accounts filed by WBL, “the directors are satisfied with the results for the period and are confident that the group will continue to trade profitably in the coming year”.

The firm operates meat procurement and processing facilities at Camolin and Bunclody in Co Wexford, Navan in Co Meath and Liege in Belgium.

The directors state that “a hard Brexit has the potential to adversely impact the group’s industry. The board of directors have strategically and financially considered the impact this may have on the group and have put provisions in place to manage this”.

On the group’s future developments, the report states that “the group aims to maintain and grow its market share and research additional ways to add further value to meat and its byproducts”.

1 ‘My rent here is so low it’s a joke’
2 Goodbody’s planned €155m sale to Bank of China falls through
3 This charming man: how Paschal Donohoe won the Eurogroup presidency
4 Government won’t name date for EV grants for car dealers
5 Banks will be judged less on payment breaks and more on next step
6 Caveat: The tourism sector deserves to be taken more seriously in this crisis
7 How to . . . move (almost) everything to your new phone
8 ‘Sad day’ for House of Ireland as tourism retailer goes out of business
9 Bank of Ireland launches €200,000 prize fund
10 FC Barcelona to pursue Nike for compensation over defective shirts
Real news has value SUBSCRIBE