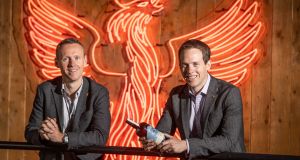 Teeling Whiskey increased its pretax profit last year by 56 per cent, in a period when the seven-year-old Dublin-based company sold about 900,000 bottles of its spirit.

Latest accounts for Teeling Whiskey Company, which is majority-owned by brothers Jack and Stephen Teeling, show it made a pretax profit of €1.01 million in 2018, up from €643,424 in the previous year.

Its turnover rose 5 per cent to €15.6 million. This comprised €13.6 million in the sale of goods and €1.9 million for the rendering of services.

Turnover in Ireland declined 5 per cent to €4.8 million, and in Europe by 6 per cent to €3.7 million. However, sales from the rest of the world rose 20 per cent to just more than €7 million.

While satisfied with the result, Jack Teeling said the company had budgeted for faster growth. “We were hoping growth on the revenue side would be a little bit faster but it was a little bit slower in one or two key markets. But we’re going in the right direction.”

Teeling Whiskey was set up in 2012, opening a distillery in the Liberties area of Dublin in 2015. It began releasing its own whiskey in the past year and has won a number of international awards for its products. Global spirits group Bacardi is a minority shareholder in the Irish company.

Teeling sold about 900,000 bottles of whiskey last year and is hoping to increase that number this year. “We are hoping for over one million now for this year, which would be nice,” Mr Teeling said.

In terms of Brexit, Mr Teeling said a no-deal scenario would be problematic for its supply chain but he said its sales in the UK have grown sevenfold this year.

“The biggest challenge for us is our European supply chain. Most of our whiskey [for the Continent] goes through the UK. How long is it going to take in a no-deal Brexit? Who knows? But we’re not the only ones in that boat.”

No dividend was paid last year, with the group’s accumulated profits increasing to €8.2 million. Shareholders funds stood at €14.6 million at the end of 2018.

The accounts also show that its visitor centre made a profit last year of €389,929, while the net assets of that business – Newmarket VC Ltd – were valued at €1.1 million. “It’s been profitable from the start and provides us with good cash flow,” Mr Teeling said, adding that the number of visitors to the distillery since it opened would exceed 500,000 this year.