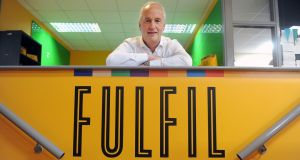 It all comes down to taste.

When Fulfil first launched its protein-rich nutrition bars in early 2016, the outlook for the brand was quite modest, says chief executive Brian O’Sullivan. Within three months, it was, as he puts it, “a runaway success”.

“You have a lot of healthy bar brands out there but the issue is they don’t taste that great. You’ve some great-tasting bars out there, and I’ve come from that background, but they wouldn’t have necessarily the health connotations there and the health ingredients,” the former Cadbury Ireland boss says. “And then what Fulfil has done is it has hit the sweet spot in the middle.”

O’Sullivan arrived in 2017 as the company was on a rollercoaster ride and struggling to keep up with demand while developing what was still a very young brand. Initially he came on board as a consultant, carrying out a review on the potential for the business and how best it might grab that opportunity. On the back of that, he was asked to join the business full-time as CEO.

For the Corkman, it was a timely move. He had only just stepped down from a senior executive role with Cadbury owner Mondelez after 17 years, most recently in a global executive role for the group, based in Switzerland.

“That was a personal family decision. My wife and myself decided we had two daughters here in Ireland, we had one with us in Zurich, and it wasn’t for us the long term.”

Coming back home to no particular employment, he tapped into the business network built up over the years in the confectionary sectors. Through that he was put in touch with Barry Connolly, the man whose Richmond Marketing was behind a series of top “trend” brands in Ireland – from Red Bull and Kopparberg ciders to Fever Tree mixers.

Connolly was also the largest single shareholder in Fulfil, a company founded by two of his former employees – Niall McGrath and Tom Gannon.

O’Sullivan’s track record helped. At Cadbury, he had started by reversing a trend that had seen the business missing sales targets over a number of years before persuading his UK bosses to take advantage of the disarray elsewhere to pursue growth as the market for discretionary goods collapsed in Ireland following the property crash.

Then there was the unique experience of managing a merger with US group Kraft to form Mondelez against vociferous opposition in the UK.

But it wasn’t always about chocolate. Growing up in Blarney, his first experience of the workplace came as a 14-year-old with a part-time student job selling tea alongside salesmen for Barry’s, where his father worked.

“I was intrigued by the whole [sales] thing. I enjoyed it and got the bug, I think,” he says.

Leaving school, he sidestepped university to start work as a salesman for a number of different companies, including drugmaker GlaxoSmithKline and consumer goods group Reckitt Benckieser before joining Cadbury.

For O’Sullivan, the real attraction of Fulfil was the disruptive nature of the business – and its potential.

“As people are turning against sugar, the traditional bar brands have tried to crack it by adding different ingredients and doing different things, but they really haven’t addressed the issue,” he says. “ And then, here in Ireland, a group of guys had got together and suddenly they had created a solution to what was an Irish problem, but actually [was] a global problem. And that’s what I saw in terms of the real potential of the brand then. That’s what got me really interested.”

Fulfil wasn’t the first brand to target the market for protein nutrition snacks. But, what it quickly discovered on launching was that it was the first to appeal across the range of consumers. Until then, most brands had targeted either the active health/gym market or the diet/slimming sector.

Part of that, O’Sullivan argues, was down to taste. The other ingredient, something that would never be available to most startups, was marketing nous.

It was a major advantage for Fulfil when it came to design of packaging, to getting the bars into stores and, more importantly, where and how they were displayed when they got in there.

From the start, Fulfil has stuck close to the essentials. Even now, after four years of doubling its sales to a point where consumers this year will spend close to €100 million on the product across 10 core markets, Fulfil has just 24 staff, and only 18 of those are full-time – though it does have a wide network of specialist advisers that it can and does call on as the need arises.

And O’Sullivan and I are talking in the company’s head office, which is on the first floor of an industrial unit in an estate just off the M50. They are moving, but only because growing staff numbers means that they need more space. The new headquarters will be in the same industrial estate, albeit a more traditional office building. Spare it may be but, even here, the marketing genes behind the company shine through, with the offices decorated in the company’s trademark yellow colours and branded throughout.

In early 2018, O’Sullivan says the company finally broke with its early mindset of the business as a player in the protein segment of the market to target the much bigger general snacking market.

“Our competitors are not other protein bars; they’re the world of bars in snacking which includes, you know, the big players,” O’Sullivan says. “Our main difference from the traditional protein bar is that our consumer is just an ordinary person living an ordinary, busy life.”

It may see its customers as ordinary workers or people at leisure looking for an energy pick-me-up, but Fulfil is fully aware that its success is down to the way it has been able to disrupt a market that has been largely stable for generations.

“A lot of it,” says O’Sullivan, “is breaking away from rules. The price point broke a rule for an impulse bar. There’s another rule that says it must be 20gm of protein, but why? Another rule is they shouldn’t taste great because then I’ll feel I’m actually doing a proper thing. Well, there’s another rule to break. It can taste great and will still deliver what you need.”

It also went against trend in the nutrition bar market by keeping chocolate – the world’s number one flavour – among the ingredients in all its products.

“So, I think in disrupting the market and that’s what Fulfil has done in Ireland and is doing everywhere else. You have to break rules and figure out which ones are there because they’re important, and which ones are just there. And there’s so many just there.”

Fulfil’s success in breaking those rules has now attracted the attention of Hershey – one of the largest confectionary brands globally. The US giant is one of those traditional brands trying to adapt to new consumer tastes. Part of that involves getting into nutritional snack bars.

Hershey has made several investments in the area. Only this week, it has splashed out almost $400 million on US group One Brands – whose one-calorie bars target the diet end of the market. But its investment in Fulfil, announced last week, was notable mostly for its novelty: Hershey has a very limited presence in Europe and has heretofore concentrated its international expansion elsewhere.

It has taken what has been described as a “significant minority stake” in the Irish business, in a move that will give it access to a fast-growing brand and a strong marketing network that it can presumably tap for other parts of its portfolio to beef up its European presence. For Fulfil, it gives the company upfront investment to fund its aggressive expansion plan. But it also holds out the tempting prospect on an assault on the US – the biggest snacking market worldwide.

Details of the Hershey deal are sketchy, but it is understood that Connolly will remain the major shareholder, and it is likely that AIB, which acquired a 25 per cent share in the business last year in a funding that saw Fulfil buy out its founders, may have cashed in at least some of its stake to recoup that cost. Hershey has been offered a seat on the board, though whether they take it up has yet to be confirmed.

So, how does it feel to sit down with an industry behemoth?

“It’s interesting because, you know, being involved in the lead-up to it, it kind of normalises in your head and it’s just another part of this rollercoaster ride that we’ve been on,” says O’Sullivan, who admits to being taken aback by the scale of the reaction to the news in the industry internationally. “I knew it was a big deal but it is really a big deal.

“If you think of it as a consumer sales €100 million brand trying to square off with Hershey coming in and investing, to me it doesn’t make sense,” he says. “But if you say, there’s a €100 million brand and it has the opportunity and the potential to be a billion-euro brand, then it makes sense.

“Have we worked out, or have I worked out in my head how that works? No. But at least we have now got that relationship where we can explore those things. To get this brand to its full potential will require help from outside that we don’t currently have today. And Hershey could potentially be that.”

So, does the investment presage a full takeover of the business? O’Sullivan concedes it is an obvious question for a company of its size and boasting its current growth rate. But it’s not something that preoccupies him.

“I know from my history working with different companies that when M&A-type stuff gets spoken about at the coffee machine, the game is up on the business. I’ve seen it. And you know, there’s no way that’s going to happen me on my watch anyway.

“As far as I’m concerned I know the end goal and I’m going to run as fast as I can to get there.”

At the beginning of the year, a speaker at a conference O’Sullivan was attending gave the business audience seconds to write down their “goal”.