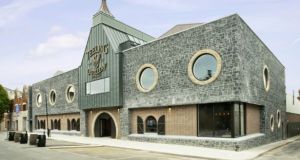 The Teeling Distillery and visitor centre in Dublin 8

The number of visitors to Irish whiskey distilleries is expected to surpass 1 million this year.

The forecast comes as whiskey distilleries continue to be one of the fastest-growing tourist attractions locally. A total of 923,000 people visited Irish distilleries last year, up 13.4 per cent on 2017, when they attracted 814,000 people.

Currently there are 13 whiskey distillery visitor centres open. However, a further eight more are scheduled to start operations this year, including the Powerscourt Distillery in Enniskerry, Co Wicklow, Diageo’s Roe & Co at St James’s Gate in Dublin, and the Shed Distillery in Drumshambo, Co Leitrim.

Some 88 per cent of visitors to Irish distilleries in 2019 were from overseas with 40 per cent coming from North America and 12 per cent from Britain.

The Irish Whiskey Association (IWA) said the sector is well on track to reach 1.9 million visitors by 2025. However, the organisation’s head, William Lavelle, warned the recent increase in the VAT rate on the hospitality sector could impact on growth, as could a disorderly Brexit.

Irish whiskey is currently the fastest-growing premium spirit in the world, with sales growing at more than 10 per cent a year in more than 75 countries.

Figures released last week show whiskey exports are now valued at €620 million annually and account for 42 per cent of total beverage exports from the Republic.

The thirst for Irish whiskey has led to a sharp rise in the number of distilleries locally. In late November, Blackwater Distillery in Lismore, Co Waterford, became the 21st operational Irish whiskey distillery on the island. There are another 25 in the pipeline, with five slated to open in the coming months.

The IWA, which originally set a target of doubling global sales from six million nine-litre cases to 12 million by 2020, recently said it is now looking to double sales again to 24 million by 2030.

“Tourists and Irish whiskey lovers alike are keen to know more about the back-story of the whiskey – where, how and by who it is made. They want to experience the heritage and vibrancy of our distilleries. The Irish whiskey industry has a great tourism offering, and it’s only going to grow as more distilleries open their doors to the public in 2019,” he added.

Dining out: 11 of Dublin’s best restaurants with outdoor spaces