Greggs nudges up profit forecast after strong finish to 2018 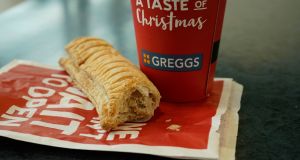 Greggs, which launched a vegan version of its popular sausage roll last Thursday, said like-for-like sales in its company-managed shops grew 5.2 per cent in the fourth quarter. The company, which opened 149 new shops last year to take its total to 1,953, in November upgraded its pretax profit forecast to at least 86 million pounds, sending its shares to a high of 1,442 pence. chief executive Roger Whiteside said

Greggs had delivered “a very strong finish to 2018 despite the well-publicised challenges in the consumer sector”.

“This performance was broad-based, reflecting the strength of our range of freshly-prepared food and drinks, and the strategic changes that we have made in recent years to focus more effectively on the food-on-the-go market,” he said on Wednesday.