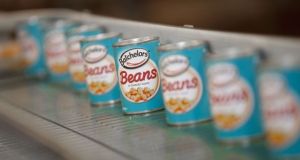 Valeo, which owns Batchelors, filed its accounts in recent days with the Companies Registration Office

The value of the assets of the acquisitive, Irish-run Valeo Foods group has broken the €1 billion barrier, its first set of publicly-filed accounts suggests.

The group, which in recent years has mopped up several European and UK food companies, valued its assets at the end of March at €998 million, according to accounts provided to The Irish Times.

Since then it has made further acquisitions, including the estimated €110 million purchase in August of UK confectioner Tangerine, whose brands include sweetshop favourites such as Fruit Salads and Refreshers. Valeo already owned food brands such as Odlums, Jacob’s biscuits and Fox’s Glacier Mints.

The accounts, filed in recent days with the Companies Registration Office, give the first detailed look at the finances of the unlimited Valeo group since its formation in 2010.

These acquisitions, together with the Tangerine deal, have since pushed the group’s full-year turnover closer to about €870 million, and on track to break the €1 billion annual sales barrier after just a few more modest-sized buyouts.

In the year to the end of March, Valeo, run by former Aer Lingus executive Seamus Kearney, recorded an operating profit of €63.7 million, up from €58.6 million. Its bottom line net profit of €18.2 million was down from €22.8 million on finance and acquisition costs.

The group’s balance sheet reveals bank borrowings of €644 million at the end of March, as the group borrowed further to fund buyouts. Valeo has made about a dozen purchases since it was set up eight years ago, with backing from Cavan dealmaker Seamus Fitzpatrick’s private equity group, CapVest.

During the 12 months covered by the accounts, Valeo employed an average of about 1,300 staff. The finance statements also show that, during the period, 45 per cent of its sales came from Ireland, with about 30 per cent from the UK. About one-eighth of its sales came from elsewhere in Europe, with the main markets including Italy, while the rest of its turnover was from global exports.

The directors of the business described it as a “solid performance in line with expectations”. A dividend of €5.5 million was paid to the shareholders.

The Tangerine deal in August has catapulted Valeo into the position as one of the largest ambient food groups in its segment in Europe, and significantly expanded its export footprint. The deal saw it take on nostalgia-laden sweet brands such as Sherbet Fountain and Dip Dab.

It now employs a total of about 3,200 people across 20 manufacturing and sales sites in Ireland, the UK, Italy and the Czech Republic.

The deal was part of a major push by Valeo into the European confectionery market, and followed similar buyouts late last year of Big Bear Confectionery in the UK and Candy Plus in the Czech Republic.

Will remote working become the norm? 05:30
‘Going abroad forced me to challenge assumptions that I had’ 05:28
Tighter regulations for car makers will drive buyers to choose electric 05:21
Goffs expecting sharp slide in horse sales due to Covid-19 05:00
‘Triple jeopardy’ looms for Irish firms, warn institute of directors 04:30