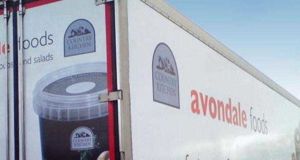 Avondale Foods is one of the North’s largest agri-food businesses, and a major supplier of own-brand products to Irish and UK retailers

A family-owned Co Armagh company which is a UK and Irish market leader in fresh packaged food produce had a record turnover of more than £51 million (€56.8m) last year.

Latest accounts for Avondale Foods, which is headquartered in Lurgan, also show a significant slide in pre-tax profits from £4.5 million in 2017 to £2.6 million for the 12 months to March 2018.

Avondale Foods is one of the North’s largest agri-food businesses, and also a major supplier of own-brand products to UK and Irish retailers, including Marks & Spencer, Dunnes Stores and Tesco.

The company, which is controlled by the Geddis family, was founded by two brothers in 1965, who initially sold vegetables from their family farm at markets and through shops. It has grown to an operation that employs 443 people, and has net assets totalling more than £23.2 million.

Avondale produces a wide range of freshly-packaged food from salads to soups, vegetable accompaniments and fresh porridge, which it distributes throughout the UK and Ireland.

In its latest set of accounts Avondale’s six directors state that they have identified “currency fluctuations between sterling and euro” as one of the major risks to their business.

They also warned that higher operating costs, maintenance of supply and pressure to reduce or maintain existing prices were also major factors that could impact on the company’s future performance.

However, the company’s directors stated that they are committed to the long-term success and profitability of the business.

“This financial year has seen the continuation of a significant investment regime in the company, increasing capacity and making ready for new product opportunities in line with the company’s strategic goals,” they added.