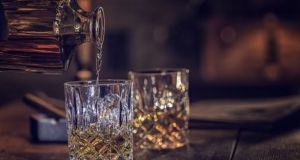 Rival Irish whiskey producers are teaming up in a bid to seek European Union funding to carve out new multimillion-euro opportunities for growth in China and Japan. The move comes as suppliers look to ease their dependence on the US for exports.

The whiskey producers have sought assistance from Bord Bia to help tap markets in Asia, where Irish brown spirits are currently small players.

Bord Bia recently issued a tender notice to carry out a study on awareness and attitudes to Irish whiskey in China, and has plans to do a similar piece of research on the Japanese market in the New Year.

Denise Murphy, alcohol beverage sector manager at Bord Bia, said the China study was a precursor to seeking EU funds for a full market development exercise for the sector in China and Japan.

Exports to China are currently valued at less than €1 million but while knowledge of Irish whiskey is low, the country is seen as a market that has significant potential for producers. Japan, which is the largest market in Asia for Irish whiskey, grew by 15.6 per cent last year, albeit from a low base.

William Lavelle, head of the Irish Whiskey Association, said China in particular could be a huge market for its members.

“Asia represents one of the biggest engines for growth for Irish whiskey over the next five to 10 years . . . China is very small but we think that it is ripe for an explosion and we have no reason to believe that it couldn’t see meteoric growth,” he said.

Irish whiskey is currently the fastest growing premium spirit in the world with sales growing at more than 10 per cent a year in more than 75 countries.

Just under half of all Irish whiskey produced is exported to the United States. Ms Murphy said while there is still plenty of market share to be gained there, the reliance on the US economy is not ideal given how volatile the current political administration there is.

If Bord Bia were to secure EU funding, which Irish dairy and meat producers have previously accessed, it would seek to begin a full market push in China and Japan in 2020.

“There are huge opportunities but massive threats as well, particularly in China, where copycat brands are an issue,” said Ms Murphy.

Mr Lavelle said China was one of more than 30 markets for growth the association has identified, of which many are in Asia.

“If you talk to some of the guys behind the bigger brands they will tell you that it takes 10 years to get a brand in a sustainable position in a market and we’re just at the start of the journey. In fact, there are certain pubs in Dublin that are selling as much Irish whiskey as some individual Asian countries,” said Mr Lavelle.

“But because of the rapid increase of the middle classes and their demand for premium products we believe the strong double-digit growth we have seen in Asia over the last three years is just the beginning. We are going to be at this for a long time but the potential rewards are significant,” he added.