Ornua and Glanbia in row over launch of Kerrygold competitor 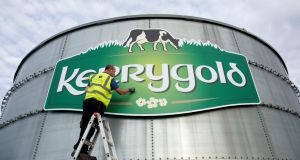 Kerrygold is the second-best selling butter brand in the US, where it grew 21 per cent last year. Photograph: Clare Keogh

Serious tensions have emerged between Ornua, the farming co-op that owns Kerrygold, and listed dairy group Glanbia, which owns 25 per cent of Ornua, over Glanbia’s decision to launch a new dairy brand that Irish farmers fear may erode Kerrygold’s gilded position in the US market.

The boardroom row over Glanbia’s US launch of Truly Grass Fed resulted in the cancellation of Ornua’s monthly meeting of directors on Wednesday. It was to have been attended by Glanbia’s nominees to Ornua’s board, Jim Bergin of Glanbia Ingredients and Martin Keane, who is also Glanbia’s chairman.

It is understood that, instead, some of the other Ornua board members and senior managers held discussions without the Glanbia nominees.

Farming sources told The Irish Times that some of the other shareholders in Ornua have concerns about the presence of the Glanbia directors at board meetings where the US performance of Kerrygold would feature, given Glanbia’s decision to effectively launch a competing brand in the US.

Ornua said its directors were “considering certain governance matters” this week following the board meeting cancellation.

It is understood that Wednesday’s discussions at Ornua included the future relationship with the Glanbia nominees on the board. A source said “nothing was off the table” but no conclusions had yet been reached.

When it was asked how its other shareholders could be reassured over the presence of a direct competitor’s nominees in its boardroom, Ornua said its board members “are aware of their responsibility as directors including obligations with regard to the safeguarding of confidential information”.

“It is the remit of the directors of Ornua to act in the best interests of the co-op, in turn protecting the interest of each individual shareholder,” said Ornua.

Glanbia insisted it would continue to support Ornua as its “largest shareholder and supplier”, but it warned that its nominees were there to stay.

“There is no basis on which the nominated directors of Glanbia Ireland would be required to recuse themselves from overseeing the overall business of Ornua,” said Glanbia.

It said Ornua had competed with its own members elsewhere in the past. As well as Glanbia, Ornua is also owned by groups such as Dairygold and Aurivo.

“Competition in the marketplace is a reality, and legal requirement, with which Ornua is already familiar. [We] believe there is sufficient room in the market for Truly Grass Fed range to thrive alongside [Kerrygold],” said Glanbia.

Kerrygold is the second-best selling butter brand in the US, where it grew 21 per cent last year.

Glanbia has launched Truly Grass Fed in the US initially as a cheese brand. When asked if a butter version may yet emerge, Glanbia said it was “one of the options under consideration”. It insisted it was aiming at a different market segment to Kerrygold.

“In a country with a growing milk pool and a looming Brexit challenge, Irish dairy farmers cannot be deprived of the opportunities to grow market share,” said Glanbia.

Some farming sources expressed particular concern over Glanbia’s decision to name its brand “Truly Grass Fed”. Kerrygold has based its US marketing strategy on Irish cows being grass fed, which improves butter taste and colour.