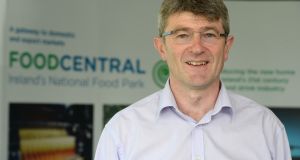 In a field in St Margaret’s just behind Dublin Airport more than 90 years ago, the Keeling family tilled their first patch of land and an Irish fruit dynasty was born.

The €300 million-plus a year business is still thriving under the eye of the founders’ grandchildren. And the current crop are also planning for the future on the same tract of land where their ancestors first nurtured apples and mushrooms.

Their latest venture is focused on industrial property development. The Keeling family first grew their fortune out of the soil. Now, they are turning the same earth as they build their future.

The family owns and is expanding the FoodCentral business park, which has attracted a clutch of food-oriented businesses to open industrial facilities on a 280-acre site in St Margaret’s . Think the digital hub, but for food-related companies, a place where competitors become neighbours and where some have even begun to co-operate.

Oakland distributes chilled goods to retailers across Britain and Ireland, including Dunnes Stores, Aldi, Tesco, Spar-owner BWG and Musgrave, which owns SuperValu. It has just moved into a near 30,000 sq ft site in FoodCentral, newly built at a cost of €4.5 million.

William Keeling, the brother of the Keelings food group chief executive Caroline Keeling, is the family’s “property guy”. He has spent more than eight years developing the FoodCentral park from concept to bricks-and-mortar reality, with a total investment to date of about €20 million.

“I worked as kid in the family’s wholesale market . . . I picked strawberries . . . I did all that stuff during the summers,” said Keeling. “You learn the business and you understand it better. It makes you more engaged. There are things in your childhood that you picked up and didn’t realise it, that help you in your career now.”

After qualifying as an accountant, Keeling spent most of the next two decades working abroad, first for the Chiquita Banana Company in the Netherlands. In 1992, he joined the family business and the following year he went to Britain to oversee the family’s foray into the banana market there. By the time he left, the Keelings were selling about one in seven of the bananas bought by the British public.

He then ran Keelings in Britain and Europe before returning to Ireland in 2010, in the middle of the western world’s worst property crash, to work on the nascent property venture. It was interesting timing, to say the least.

“In recessions, people still need to eat,” he says. And the companies that supply their food need somewhere to locate themselves.”

Keeling says the biggest impact of the recession was that it simply made FoodCentral a longer-term project than was originally envisaged. The genesis of the park was a decade earlier, when Donnelly struck a deal with the Keelings to open a facility on their land.

“They are a competitor [of the Keeling group]. We were able to compete but yet able to co-operate at the same time. Even back then, you could see how companies in the food industry could benefit from being in the same location.”

For a property venture, the park’s business model is agnostic on whether it develops the facilities itself, or steps aside to allow others do it.

“We’re happy to adapt to each client. We sold land to Dixons who built themselves. We also sold land to Oakland but we project managed the build, and that worked out very well. We’re talking to someone at the moment where we’d get it built for them and they’d be the tenant. HPP are a tenant... So we’re flexible on all models.”

He does not envisage opening up the park to non-food businesses, which would be a “challenge” from a zoning perspective, anyway. “If you go to an industrial estate near here, who knows what is positioned around you. Food companies have seen a benefit, bringing their clients out here to a food location where food is grown. We’re determined to keep this as a food environment. It helps if the companies here are doing well and growing.”

“Our chances are better with companies from the Dublin area. It is hard to find an empty food building anywhere in the city. Following the recession, all the old ones were filled. We’re looking to make good progress over the next 10 years with bespoke food buildings. It’s not like we’re putting up blocks and everybody will be the same.”

Following the Oakland deal, the next new facility planned at FoodCentral is another premises for the Keelings food group. It is due for completion in January 2020.

Keeling says co-operation between the food businesses at the park is frequent. For example, on the week I visited, Keelings was short of storage space, so it was able to store some of its products in Oakland.

“The other side of the coin is that Keelings this week is also transporting some products on behalf of Oakland, because Keelings has most efficient routes of transport in certain areas,” he said.

The facilities on the FoodCentral site have access to a 2MW combined heat and power plant. It is primarily used to provide heat and CO2 for the acres of glasshouses used for growing fruit by the Keelings.

“But another possible area of co-operation might be to see if some of that heat could be sent across the road to the Donnelly tray washing facility.”

A feature of many business hubs across differing sectors is their ability to, ultimately, attract research and development facilities onto their site, giving them an element of academic and scientific cachet. This may come later for FoodCentral, Keeling says.

“We have talked to universities about a research centre, and that’s always an ambition. I visited similar food parks around the world. A couple of them said the research tends to come later on in the process. That was their advice.”

While the food industry is performing well in the current booming economic climate, it is almost uniquely exposed to the potential consequences of a hard Brexit. The chance of a disorderly exit rose significantly this week, after Europe rejected the UK government’s Chequers plan for a hybrid customs arrangement.

“The recession made Keelings and other food companies a lot leaner. It gave us a shock. But there could be another shock coming [in the form of Brexit],” he said. “The State needs to consider targeted support for food companies that need it.

“About 80 per cent of Irish food exports cross the UK. There could be major disruption to goods in transit. But business people will carry on. They will find the best way to adjust. Food companies still must do their own planning for different scenarios.”

Keeling said FoodCentral highlights to potential clients the food park’s position close to the M1 and M50 motorways, providing relatively speedy access to Dublin port, through which most food imports and exports enter and leave the State.

“That may be an advantage if customs issues make things more challenging after Brexit, causing delays.”

Keeling confirmed one potential development within the park, that was “about to happen” before the 2016 Brexit vote, was “held back” by the client following the referendum result. He hopes, however, that the demand remains “pent up” and eventually returns.

As they build out their fruit and property empire in the fields of north county Dublin, the Keelings have built one of the largest family-run businesses in the State. But business is business, even when you operate it alongside your siblings: “We try to keep family talk separate from business talk. If siblings are working together, it’s also good to have different responsibilities and areas to focus on.”

For the next decade, at least, it looks like the Keeling’s “property guy” will have his hands full at FoodCentral.

Probate is changing: What does that mean for you? 05:42
Stocktake: Correction time for stock markets 05:40
Irish golf tourism faces ‘wipeout’ unless Covid travel restrictions eased 05:19
Galway-based CitySwift to create 50 jobs over next two years 05:15
Stocktake: US election likely to provide opportunity as markets fret 05:10

1 Sean Quinn stunned at rebranding of Quinn Industrial Holdings
2 Am I paying too much for my buy-to-let mortgage?
3 Three Ireland switches on 5G network around the country
4 Irish golf tourism faces ‘wipeout’ unless Covid travel restrictions eased
5 Irishwoman Adrienne Gormley joins N26 as chief operating officer
6 Help, I’ve no PRSI stamps – can I still get a pension?
7 Me & My Money: ‘Money can’t buy you happiness but it can make life a lot easier’
8 Pallet manufacturer looks to imports as timber crisis takes root
9 Pilita Clark: The looming legal minefield of working from home
10 State 'should bail out’ troubled homeowners with mortgage assistance payment
Real news has value SUBSCRIBE