Three ducks, nine geese and six sheep put the herders through their paces 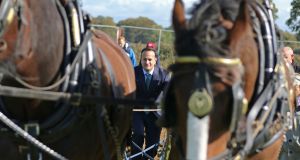 There are essentially two methods of herding.

One involves a marriage of skill, obedience and love between man and dog. The result is that a clutch of somewhat reluctant animals is chivvied into an enclosure, to the sound of several distinctly different whistles and indecipherable commands shouted across a hillside.

The other is pretty much down to force of numbers, and bustling everyone along through the throng.

Sheep farmer and dog breeder Donie Anderson, Glenasmole, Co Dublin, is a master of the first category. He and his partners – Jess , Bob and Toss – put on a display of sheep dog trialling on Friday, the third extra day of the National Ploughing Championships, staged to make up for the wind storm loss of Wednesday.

Jess, a black, brown and white Border Collie, with a fondness for rolling over to have Donie tickle her tummy, was tasked first with shooing three prissy looking farmyard ducks into a makeshift pen.

Heads stretched to full height, they peddled indignantly this way and that but, responding to Donie’s commands, Jess ushered them gently in the correct direction.

Next came nine geese, a more potentially fractious affair. Despite some flapping and a hiss or three, Jess once more showed how it was done, marshalling the gaggle up a ramp at the side of a small horse box, out the rear again and into another pen.

However, the six sheep lolling about, grazing nonchalantly on the other side of the field, were a different matter. Whistled into action by Donie, one sheep broke away and, turning the tables on Jess, was determined to herd the dog, galloping after her across the field. “Ah,” said Donie in exasperation, “that one; just like her mother.”

In retaliation, he deployed Bob, a more assertive four-legged associate who adopted the divide-and-conquer strategy, hiving two sheep off from the rest and zig-zagging them forward into a pen, before rounding up the others.

Their expert display won appreciative applause just as Taoiseach Leo Varadkar’s entourage galloped in. “Just stand there now,” said a man to his young son, “and we’ll get a photo if he allows it.”

The Taoiseach allowed lots of photographs as he was shepherded this way and that by National Ploughing Association officials, ear-piece wearing security staff working for them, and various minders who sought to navigate the visiting herd through the crowds of show visitors and around a variety of stands.

“I’ll give it a go,” said the Taoiseach gamely as he grasped the reins and Ned and Ted ploughed a near perfectly straight furrow. “He done great,” pronounced Mr Cogan.

The Taoiseach then inspected the work of tractor ploughman Eamon Tracey of Carlow. Asked by The Irish Times how he had done in the competition, Mr Tracey replied: “I got on okay.” In fact, he won the championship outright and is also the World Champion.

And with that, the political entourage was herded back– and not a whistle or bark needed to get them into their cars.

Not everyone got their photo, however.

Donie and Jess had been waiting, hoping for a picture with the Taoiseach as he was moved chaotically between stands but, alas, it was not to be, such was the mêlée.

Now, had man and dog been in charge, it would all surely have been so much calmer.