Chemical company to write down value of its agriculture business 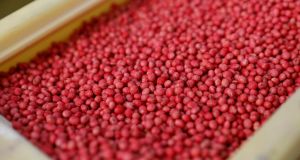 Farmers in Brazil are shifting to soybean to draw Chinese buyers after the country imposed a 25% retaliatory tariff on US soybeans. Photograph: Reuters/Shannon Stapleton/File Photo

DowDuPont said it will take a $4.6 billion (€4bn) charge to write down the value of its agriculture business when it reports third-quarter results, sending its shares down up to 6 per cent in extended trading on Thursday.

“The lower growth expectation is driven by reduced planted area, an expected unfavorable shift to soybeans from corn in Latin America, and delays in expected product registrations,” the company said in a filing.

Farmers in Brazil are shifting to soybean to draw Chinese buyers after the country imposed a 25 per cent retaliatory tariff on US soybeans. The new cash flow projection for the unit reflects the anticipated impact of events of 2018 and will result in a reduction in long-term forecasts of sales and profitability, the company said, without providing numbers.

Analysts on average were expecting the company to report a profit of $1.6 billion, or 65 cents per share, for the three months ended September, according to Refinitiv data. The chemical company, formed after Dow and DuPont completed their $130 billion merger last September, is expected to report third-quarter results on November 1st.

DowDuPont will create three separately traded companies next year, splitting into companies that look at agriculture, plastics and specialty products. The company’s shares were down 3.6 per cent at $56.50 in after-market trading. – Reuters