Farmers must be shielded from market volatility, says industry group 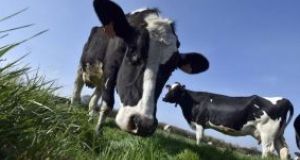 Measures must be introduced to help farmers protect their incomes against market volatility, according to the Irish Co-operative Organisation Society (Icos), which is again calling for an income stabilisation mechanism for primary producers.

Icos said that at a time of “unprecedented and historic uncertainty” for the Irish agrifood sector, the measure would let farmers create a modest “rainy day” fund to support them during periods when market returns were weak.

The proposed mechanism would permit a farmer to voluntarily defer up to 5 per cent of their gross receipts in any one year at any time within five years. This sum would be subject to income tax at the time of drawdown, which must take place within five years of being deferred.

Such a measure has previously been proposed by the organisation, with Icos president Michael Spellman claiming its prior introduction would have been invaluable to farmers in recent years who have been hit by extreme weather events, price volatility and a drop in the value of sterling arising from Brexit.

Icos, which represents dairy co-ops and livestock marts, said the milk quota regulations allow for the creation of an income stabilisation measure.

“Family farm income is fluctuating from year to year due to circumstances outside the control of the farmer. External forces such as weather, geopolitical matters, currency, feed and oil prices, disease and macroeconomic factors have come together to cause income volatility, not to mention the spectre of Brexit, which will be damaging for the long term no matter what way it is finalised,” Mr Spellman said.

“This is a strategic measure aimed at supporting the economic sustainability of the rural economy and the family farm model. It is a prudent, countercyclical option designed specifically to help the farming sector manage the worst effects of volatility,” he added.