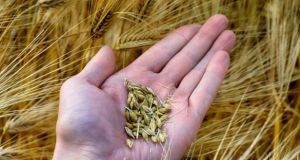 The Irish agri-services group, which earlier this week also announced the acquisition of Bunn Fertiliser for £14.2 million (€16.4 million), said revenues for the six months ending January 31st rose by more than 10 per cent to €564 million from €507 million for the same period a year earlier.

Origin, which typically derives more than 90 per cent of revenue in its second half, recorded a €2 million operating profit, versus a €1.79 million loss in the same period in 2016.

“The group achieved good volume growth and margin recovery in the seasonally quiet first half of the financial year following a challenging trading year in 2016. Performance was supported by a more stable near term planning environment for primary producers together with the benefit of generally settled weather, which led to increased on-farm activity throughout the period,” said chief executive Tom O’Mahony.

The company on Thursday also said it had acquired Resterra in a move which it said would enhance Origin’s growing digital technology capabilities.

Under the terms of the transaction, Origin has acquired 100 per cent of Resterra on a debt-free and cash-free basis, for an initial cash consideration of £11.4 million. Additional contingent deferred consideration of up to £4.8 million will be payable based upon the achievement of specific profit targets.

Revenue and earnings before interest and taxes (ebit) for Resterra in the 2016 financial year were £2.6 million and £800,000 respectively.