Irish food industry turning to Middle East due to Brexit 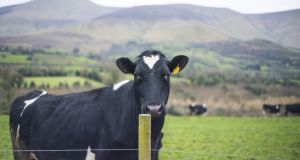 Ireland’s biggest markets in the Middle East are Saudi Arabia, at about €135 million a year, and the United Arab Emirates, at about €60 million. Photograph: iStock

Ireland’s €20 billion food and beverage industry is turning to the Middle East for sales as the United Kingdom, its biggest buyer, prepares to move ahead with Brexit and leave the European Union.

The UK accounts for 43 per cent of Ireland’s agriculture exports, buying about €1 billion each of beef and dairy products a year, Minister for Agriculture Michael Creed said in an interview in Dubai.

Ireland’s biggest markets in the Middle East are Saudi Arabia, at about €135 million a year, and the United Arab Emirates, at about €60 million, with cheese and other dairy products leading sales in both, he said.

No country is feeling the pressure from the UK’s vote to leave the trading area more than Ireland. The UK is the top destination for the country’s exports including Guinness beer and Kerrygold butter.

Ireland’s “unique exposure” to the UK market makes it strategically important for the country to diversify its sales, Mr Creed said in a Bloomberg TV interview in Dubai.

“Trade wars don’t suit us,” he said. “Trade missions in the context of Brexit take on an added imperative.”

Ireland wants to boost its agriculture exports to €19 billion by 2025 from €11 billion in 2016, he said. The Middle East, North Africa and Southeast Asia are attractive because of a growing middle class, westernised diets and increased consumer spending, he said. China is now Ireland’s second-biggest market for dairy and pork exports, after the UK.

About 90 per cent of Ireland’s farm output is exported. The food and beverage industry has annual production valued at about €20 billion, said Tara McCarthy, chief executive of the Irish Food Board.

“We have identified hot spots around the globe that we see as offering significant potential,” Mr Creed said, highlighting opportunities in areas of the Middle East, North Africa and Southeast Asia.

Ireland exported “huge volumes” of beef and sheep meat to Iran in the 1980s and 1990s but hasn’t been able to take advantage of a trade deal it completed in October to export sheep meat to Iran because of difficulties in getting payments out of the country, he said.

Iran can be a gateway for sales elsewhere, including Russia, which is currently closed to direct exports of some EU foods, including dairy products, due to sanctions.

“If we can get into Iran, the opportunities for re-export from Iran into other countries are significant,” he said.

1 State may face €1bn in compensation in Covid-19 case, Press Up claims
2 How I managed to cut my mobile phone bill by at least a half
3 Lahinch Golf Club runs out of its own cash after €3m Covid-19 hit
4 Fiona Reddan: Who’s afraid of Revolut? Not AIB and BOI it seems
5 Is Coveney the right man to lead Greencore out of Covid-19 crisis?
6 ECB ‘should wipe Covid crisis debt’ to help nations recover
7 Son putting elderly dad under pressure to sign over land
8 Workhuman predicts double-digit revenue growth for 2020
9 Ireland must beware as digital tax reform enters critical phase
10 Salesforce in talks to buy Slack in huge cloud software deal
Real news has value SUBSCRIBE