Appetite for risk-taking the key to Kerry, Glanbia and Greencore moving forward 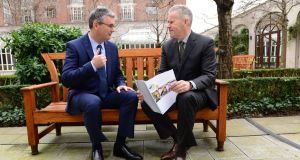 Over the past month, three major food companies that are led and managed from Ireland released financial results and provided details on key corporate decisions. In doing so Glanbia, Greencore and Kerry provided insight into the strategic direction of the Irish food industry while also underlining their own aims in a fast moving global marketplace.

Two words keep resurfacing when analysing the development of this cluster of Irish food companies over the past 30 years – tenacity and ambition.

The tenacity is found in particular during those periods when each of these businesses encountered significant challenges to their progress. The ambition is revealed by the scale of their achievements relative to where each of them started out.

To understand why each of these companies is well placed to face the challenges posed by intense competition and geo-political hurdles, including those created by the Trump administration and Brexit, you have to examine their histories.

It was a short 30 years ago when management and shareholders in Kerry Group believed the slaughtering of cattle in Midleton, the killing of pigs in Tralee and the dispatching of turkeys in Monaghan was an optimal way to create equity value.

Today its investors would be horrified to think any such activity formed a core to the business. In the intervening period Kerry has travelled a long journey to become a leader in taste and nutrition markets worldwide.

Glanbia was busy building milk powder plants, competing in the Dublin liquid milk market and compounding animal feed in the 1990s. Then its constituent parts, formed by Avonmore Foods and Waterford Foods, were focussed on activities that are now frowned upon by international institutional investors. To create value for its shareholders Glanbia went through its own transformation to place advanced protein and nutritional foods at the centre of its strategy.

Greencore was proudly advocating the benefits of refining sugar and converting barley into malt as the keys to unlocking returns for its owners in the 1990s. Today those activities are gone and replaced by leadership positions in the fast growing food-to-go market in the United Kingdom. That platform was augmented by a major acquisition before Christmas in the United States which propels its critical mass in that high volume market to a new level.

The details revealed by these companies over the last four weeks must be considered against this backdrop. The numbers in themselves are stunning. Kerry generated a trading profit of €750 million during 2016. Glanbia produced operating profits of €350 million, and Greencore is expected to deliver profits above €150 million this year. All three have a combined stock market valuation of more than €20 billion.

As a cub analyst during the 1990s I used to be told that food companies were considered defensive in the investment community, and that badge remains widely used. It implied food companies might be boring but offered predictable cashflows, regular dividends and limited surprises. The evidence is the exact opposite.

At that time Irish food companies were told the blue-chip stock market food companies in London were the ones to emulate most. Unigate, Northern Foods and Beresford were presented as templates for how Irish food businesses should evolve. All three no longer exist. Submerged by poor acquisition decisions, intense pressure from retailers or over-leveraging, these companies ultimately succumbed to acquirers and disappointed their shareholders in the process.

The Irish companies went through their own soul search to navigate a way through after starting their stock market lives in that period. Kerry picked the ingredient business Beatreme in 1988 as its pivot into a new phase of growth. Glanbia chose Optimum in 2008 as its door into performance nutrition, while Greencore purchased Hazelwood Foods in 2000 as a means of scaling up a presence in the British sandwich and ready-meals market.

All of these were controversial moves at their time. The entry multiples paid looked high, the businesses seemed alien for the executive teams buying them, and there was an uneasy sense among shareholders about the changes in strategy.

Those changes are themselves significant. Since January alone, Glanbia has committed to a new $400 million (€380m) cheese project in the US that is structured to share the investment risk with a set of primary producers, thereby limiting the downside in this volatile capital-intensive business.

It subsequently went on to acquire two companies in the protein and performance nutrition markets for €181 million that accelerates its momentum in these fast-growing segments. Last week it proposed the sale of assets in Ireland to its co-op related associate.

Greencore has spent $750 (€713m) million on a business, Peacock Foods, that brings it closer to key large scale US food producers with a new range of products. That deal kicked off on the week President Trump was elected, and was consummated by year-end.

Kerry Group has been less active on the acquisition trail in this period but did make a critical decision in appointing a new chief executive. It opted to drop down a generation and pick 43-year-old Edmond Scanlon to lead the €13 billion organisation in its next phase of growth. His strengths lie in the Asia Pacific market and as an expert in functional foods.

Asia Pacific is the fastest growing food market on the globe. Functional foods, which combine advanced data analysis with food technology to deliver consumable products that have verifiable health benefits, are the new frontier of the food industry.

Risk-taking is embedded within this cluster of companies, and an appetite for it is key to moving forward. By definition that approach can lead to disappointment.

Alongside these businesses another Irish company, Aryzta, set out 30 years ago to build its own fortune. It began as the animal feed and fertiliser company IAWS. Management knew those earnings would not satisfy its shareholder ambitions and it moved to acquire an entirely new business, Cuisine de France, during 1997 to drive profits through par-baked sweet goods. That decision was also controversial, but it lit up a period of growth and expansion that ended up creating two valuable companies of note, Origin Enterprises and Aryzta.

Aryzta has now encountered its own moment of crisis. Certain acquisitions have failed to meet shareholder expectations. Part of its business has encountered intense levels of competition. A sequence of profit warnings and share price declines has led to management changes and a deep-rooted strategic review.

An easy conclusion would be to argue the company is stuck with no way forward. However, any in-depth study of the Irish food sector shows that companies can and do rebound from severe setbacks.

It may be lost in the fog of memory now but Kerry’s ownership of meat processing assets in the 1980s was a struggle. Avonmore and Waterford Foods both owned acquired businesses that severely underperformed. Greencore’s purchase of Hazelwood Foods was frowned upon for a period after purchase. All of them found ways to work through those difficulties and moved on to better fortunes. Aryzta now has to do the same.

The Harvard business guru Michael Porter coined the term “cluster” to define a group of companies in a similar industry. He argued such a cluster can benefit from competing with each other and analysing their peers’ strategies, development and setbacks.

These Irish food companies are, in my opinion, such a cluster. They emerged from farmer and government-owned backgrounds. When setting out there were many sceptical voices who could not see how they would compete successfully on global markets. Yet the evidence shows that business leaders who are entrepreneurial and ambitious can overcome the naysayers.

It is tenacity and ambition which defines these companies, and those attributes remain essential to driving this cluster to bigger and better futures. Joe Gill is director of corporate broking with Goodbody Stockbrokers. His views are personal