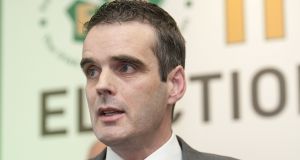 IFA president Joe Healy: said the implications of Brexit for Irish agriculture were so serious that it must be first in the Government’s negotiating position

The Irish Farmers’ Association (IFA) has warned of a “virtual wipe out” in food exports to the UK if Britain opts for a “hard Brexit” and a reversion to World Trade Organisation (WTO) rules.

The IFA’s chief economist, Rowena Dwyer, said such a scenario could see the introduction of punitive trade tariffs on Irish food exports to the UK, effectively rendering the trade uneconomic. She cited a recent report by the Economic and Social Research Institute (ESRI) which suggested a hard Brexit could see €1.5 billion wiped off the value of Irish meat exports.

Ms Dwyer was speaking at the launch of an IFA policy paper on Brexit which highlighted the sector’s dependence on the UK market and the need for tariff-free trade access to the UK to be maintained.

The paper noted that the UK was the Republic’s largest market for food and drink, accounting for 37 per cent of all food and drink exports worth €4.1 billion last year.

Disruptions to this market through the imposition of tariff barriers, border checks, certification requirements or other regulatory changes posed an unprecedented threat, it warned.

The IFA wants the establishment of a free trade deal between the UK and Europe to be made a priority of the upcoming Brexit talks.

The Government and the IFA face an uphill struggle in getting agriculture on the agenda, with Britain’s focus firmly on financial services and car manufacturing.

Even if Ireland does succeed in maintaining tariff-free access to the UK for food exports, the possibility of limiting Britain from doing a trade deal with non-EU countries remains an even bigger challenge.

The IFA’s policy paper acknowledges that a balance must be struck in the negotiations between maintaining a strong EU with specific rights and benefits for members and the benefits of keeping Britain on close trading terms with the rest of the bloc.

IFA president Joe Healy said while other EU states and politicians were sympathetic to the potential risk posed to Irish agriculture they were also adamant that Britain could not “ get a soft Brexit”.

He said the implications of Brexit for Irish agriculture were so serious that it must be first in the Government’s negotiating position. “With 22 million farmers and 40 million related jobs, there is a wider strategic objective here to maximise the future value of the EU farming and food sector.”