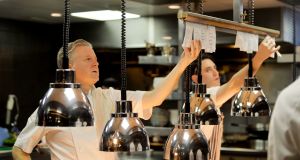 Ross Lewis in Chapter One: The loss of tables would have had a negative impact on Osteria Lucio’s revenues. Photograph: Alan Betson

Michelin star chef Ross Lewis has emerged victorious in his battle with Dublin City Council over an outdoor seating area structure for his Osteria Lucio restaurant on Grand Canal Dock.

Mr Lewis, who famously cooked for Queen Elizabeth on her state visit here in 2011, is also chef/patron of the multiaward winning Chapter One restaurant in Dublin.

Last year, the Cork native suffered a planning setback after the council refused an application by Osteria Lucio to retain an outdoor seating area structure for two years at the Malting Tower.

The loss of tables would have a negative impact on the restaurant’s revenues and Mr Lewis appealed the refusal to An Bord Pleanála.

Now An Bord Pleanála has given Mr Lewis the green light to retain the outdoor seating area for two years, but only after dismissing its own inspector’s recommendation to refuse permission.

The inspector had recommended refusal after finding that the outdoor seating area would have a disproportionate and detrimental impact on the visual amenities of the area and character of the designated Architectural Conservation Area.

He also found the reduction in the effective width of the pedestrian footpath would constitute an obstruction or clutter of the footpath.

However, the board found that retention would not seriously injure the visual amenity of the area or of the character of the designated conservation area.

It also found the outdoor seating area would not set an undesirable precedent, and would be acceptable in terms of pedestrian and traffic safety.

The board stated that, having regard to recently permitted developments in the area, it considered the structure would provide street animation and enhance the vibrancy of the street.

It was also satisfied the proposed structure would not seriously impede pedestrians with impaired mobility and that sufficient width and alternative options were available.