McDonald’s unveils strongest sales growth in at least a decade 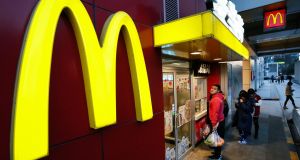 Sales at McDonald’s grew last year at the swiftest pace in at least a decade even as the fast food group faced a turbulent period in which it abruptly replaced its chief executive.

Like-for-like sales jumped 5.9 per cent both for 2019 as a whole and for the three months to the end of December, in the middle of which chief executive Steve Easterbrook was fired for having a relationship with a colleague.

Chris Kempczinski, his replacement, said the company has “broad-based momentum around the world”. Net income rose 11 per cent in the fourth quarter to $1.57 billion on revenues of $5.4 billion.

Among the first big challenges facing Mr Kempczinski is the deadly coronavirus that originated in China’s Hubei province. McDonald’s last week announced temporary store closures in Wuhan, the city at the centre of the outbreak, as well as other cities including Huanggang and Qianjiang.

McDonald’s has about 3,300 outlets in China, according to Guggenheim Securities, accounting for about 9 per cent of its store base. – Copyright The Financial Times Limited 2020