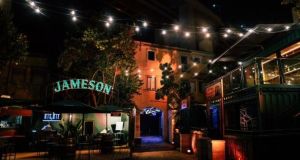 According to the Irish Whiskey Association, there was a 10.5 per cent increase in visitor numbers last year, from 923,000 to 1.02 million

Sales of Irish whiskey slowed last year in what is its biggest export market but that didn’t stop visitors to Ireland spending time at local distilleries.

New figures show that Irish whiskey sales rose 8.6 per cent in the US in 2019, compared to a 13.5 per cent increase in 2018. While an impressive growth rate, the figures are disappoing given the category has clocked up double-digit sales growth over the past number of years.

The rise in whiskey sales in 2019 was led once again by market leader Jameson, which recorded an 8.2 per cent jump in volumes. Jameson is owned by Irish Distillers, which in turn is part of the Pernod Ricard global group.

According to preliminary data from International Wine and Spirits Research (IWSR), alcohol sales were largely unchanged last year in the US with growth of just 0.3 per cent to $167 billion.

Distilled spirits were up 2.3 per cent overall, with Irish whiskey sales coming in behind Japanese whiskey, which recorded a 21.1 per cent jump in volumes. Irish exports were significantly higher than US whiskey sales however, which increased by 5.5 per cent.

Tourists from North America accounted for 34 per cent of all visitors last year, followed by Ireland, Britain, Germany and France.

While the number of visitors from North America and Britain slipped last year, this was partly offset by a rise in visitors from Australia, Italy, and the Benelux and Nordic countries.

There are 17 visitor centres in operation currently with a number of new ones set to open this year, the Irish Whiskey Association said.

Welcoming the increase in visitor numbers, William Lavelle, head of the association, warned of possible challenges ahead.

“Future growth in visitor numbers to established Irish whiskey distilleries and brand homes will require a fresh approach to attracting visitors,” he said.

“Recognising the disappointing fall-off in visitors from North America, we will be seeking to prioritise our promotional activities in the US and Canada, working closely with our state tourism agencies. We will also continue to keep a close eye on the impact of Brexit on tourism figures.”