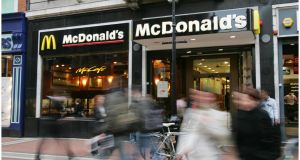 McDonald’s is ditching the coffee-house style McCafé brand from one of its flagship Irish restaurants.

The world’s biggest restaurant chain by sales will remove the McCafé from its Grafton Street outlet having submitted for planning permission to allow new communal seating and “tablet tables”.

In a planning application registered with Dublin City Council this month McDonald’s noted it also plans kitchen modifications and some refurbishments which will see the ground and first floor seating layouts altered.

The company told The Irish Times the restaurant will receive a major €1.3 million “digital makeover” that will create an additional 30 jobs. The McCafé range of food and drink will still be available in the outlet.

“We are excited about plans for a new Experience of the Future make-over at McDonald’s Grafton Street restaurant,” the company said.

The fast-food outlet rents the premises from Irish Life which forms part of a portfolio of properties the asset manager acquired in 2015 for around €154 million. McDonald’s had been paying €1.15 million in rent until its lease ran out in March 2011. That rent was subsequently adjusted down to €600,000.

In 2014 the company completed a substantial refurbishment programme which cost more than €2 million, increasing seating capacity from 100 to 300.

The Grafton Street outlet is franchised by Amir Afsar who operates 11 McDonald’s franchises in total.

The latest set of accounts for Mr Afsar’s outlets show his company made a profit before tax of €1.16 million in 2017, almost double on the previous year.

While McCafés have been removed from several premises, it’s unclear whether this is part of an overall strategy shift or specific to certain outlets.

However, the company’s UK chief executive, Paul Pomroy, last week said it was trialling barista-made coffee in some of its London restaurants in what will be viewed as its latest assault on coffee giants including Starbucks.

The company moved into the gourmet coffee market in Ireland in 2002 when it launched McCafé to sell speciality coffees, gourmet cakes, pastries and muffins. At the time it said coffee consumption in Ireland was increasing “as never before”. “We are hoping to be big players in that market,” the company said.

In 2009 the McCafé brand was formally launched in the US.

McDonald’s employs more than 4,000 people across its Irish estate of over 85 stores.