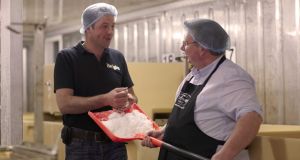 The Keoghs have been farming potatoes in north county Dublin for more than 200 years. A family operation, they supply field vegetables from “Dublin’s breadbasket” into the city. But as Ireland boomed in the early 2000s, potato farmers were struggling.

A triple whammy of Irish people developing a taste for ethnic food (based on rice, pasta and noodles), a growing view that spuds were an old-fashioned food (“something my grandparents used to eat”) and low-carb diet fads such as Atkins combined to devastate potato demand.

“The writing was on the wall,” says Tom Keogh, managing director of Keoghs, “We needed to do something about it.”

The business had been through adversity before. Keogh’s grandfather was put out of business by the heavy rainfall in 1957-1958 and emigrated to Australia. When he returned, he became one of the first to commercially produce tomatoes in the State.

But the fuel crises in the late 1970s and early 1980s made the cost of growing tomatoes in Irish greenhouses prohibitive. Cheaper Spanish imports swamped the market and the Irish tomato-growing industry tanked.

The family increased its focus on field vegetables: cabbages, cauliflowers, sprouts, broccoli and potatoes. But again, cheap imports, this time from the UK – where producers had significant economies of scale – brought increased competition in the late 1980s.

“So my Dad, in an innovative move, started to wash potatoes in the early 1990s. It sounds so simple today but, back then, you couldn’t buy potatoes washed,” says Keogh.

When potato consumption began to haemorrhage in the early 2000s it was the next generation’s turn to innovate.

The family’s first response was to introduce a “cook-in-the-bag” potato product in 2007, whereby potatoes were washed, polished and put in a bag, ready to be microwaved.

“Today it’s one of our biggest-selling lines, and it really did turn around the drop in sales that we had seen,” says Keogh.

They then set about developing a family brand.

The key element in the Keoghs’ response to struggling potato market came in the form of a shift downstream in their supply chain.

Keogh was at a family wedding in New York. “There was a huge Irish American attendance at the wedding and they all wanted to buy Irish potatoes,” he says. “So, I looked into this and found out there was 42 million Irish Americans on the [US] eastern seaboard. And if all these people wanted to eat Irish potatoes, my God, that was going to solve our Irish potato problem overnight.”

But conversations with the US FDA quickly put a dampener on those plans, as the US wouldn’t allow in raw produce. An official suggested cooking the potatoes.

Meanwhile, in the UK, the concept of “premium crisps” was just starting to emerge.

Eager to seize on both opportunities, the family set about filling the gap in the market. Four years of research and conversations with local ingredient suppliers later, the Keoghs artisan crisp brand was born.

The product launched at the height of the recession. Counterintuitively, says Keogh, this proved to be beneficial.

So that growth in premium sharing snacks jumped – really jumped. I suppose it was the right product at the right time.”

Today, with a staff of 40-odd in north Dublin, Keoghs sells its crisps globally, with flavours ranging from “chorizo and cherry tomato” to “shamrock and sour cream”. A deal struck with Emirates earlier this year will see the brand placed in all the airline’s first-class cabins. And the interest of other airlines has been piqued.

The company is also looking to push into Middle Eastern markets and expand its US presence.

Fresh potatoes, though, remain the bigger part of the Keoghs overall business. And Irish people’s fondness for spuds seems to have returned. The decline in consumption ended in 2015.