European Commission President Jean-Claude Juncker and US President Donald Trump said they had agreed in talks to 'work together toward zero tariffs, zero non-tariff barriers, and zero subsidies on non-auto industrial goods.' 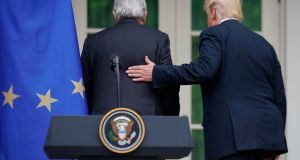 US markets rallied yesterday after the European Union agreed to concessions that appear to have averted a deepening trade war. At an unscheduled press conference in the White House Rose Garden following a meeting between Donald Trump and European Commission president Jean-Claude Juncker, Mr Trump confirmed that the EU had agreed to work towards zero tariffs on industrial goods and to cooperate more on energy.

Kerrygold, Ireland’s best known global food brand, is facing a class action lawsuit in the US over its marketing claim that Irish dairy cows whose milk makes the butter are fed on grass. A San Diego-based real estate executive has filed the case in California against Ornua, claiming “false and misleading advertising”. He says Irish cows are not exclusively grass-fed because they often eat other materials, such as grain or soya, when weather is bad and there is no grass to eat. He also claims some of these feeds can be genetically-modified.

Four key directors at Hibernia Reit have received a total of €39.9 million in stock and cash from the company’s move in November 2015 to “internalise” management of the company, which floated on the stock exchange in late 2013. The executive team have received €6.5 million worth of stock in the property company in the past week to meet a final bonus payment tied to a deal in 2015 to move management of its assets internally.

Three global music labels are limbering up to seek a High Court order against Sky Ireland, to force it to implement a “three strikes and you’re out” policy against its broadband customers who download music from pirate sites. Sony Music Entertainment, Warner Music and Universal Music have asked Sky to impose the “graduated response” policy on copyright infringement that other internet providers introduced under pressure from the music industry.

Biopharmaceutical giant Gilead has been unsuccessful in a European court in a row that could ultimately lead to affordable access to a drug used in the prevention and treatment of HIV.

Insolvency and restructuring specialist Duff & Phelps has got permission to build almost 460 apartments on a site once controlled by bubble-era developer John Fleming.

The Irish tourism industry has warned that a “no-deal” Brexit could cost the sector here up to €260 million “in the immediate aftermath” of Britain the UK’s planned withdrawal from the European Union next year. And while Brexit may be a concern for Irish companies with close business links with the UK, but almost 60 per cent of groups with trading links to France believe it will result in a significant upturn in their business, according to a new study.

In her Net Results column this week, Karlin Lillington explains why adults’ nostalgia for the pre-digital age offers no road-map for understanding or legislating the digital world teengars inhabit these days.

In the tech and innovation coverage, Ciara O’Brien runs the rule over the options if you don’t want to pay for TV, from streaming services to contract free services. Olive Keogh catches up with some of our “new innovators” from the past to see how they have fared, while John Holden considers a photograph-analysing algorithm likely to be used as tool for intolerance of LGBTQ people.

On this week’s podcast, David Hall, the founder of ICare, the not-for-profit approved housing body, says it aims to have 1,000 tenants within the next 18 months as it buys homes from lenders under a mortgage-to-rent scheme as well as empty houses around the State that are suitable for social housing. Plus Cliff Taylor and Joe Brennan talk frankly about Ireland’s flawed banking ‘culture’, while columnist Chris Johns discusses the looming spectre of no-deal Brexit.