Supermac’s ordered to reimburse €150,000 to tenant 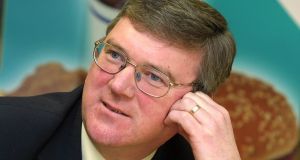 Supermac’s boss Pat McDonagh has been ordered to reimburse more than €150,000 in “overpaid” council rates and rent to the tenants of one of his fast-food outlets.

The order against the well-known Galway businessman was made in the Limerick Circuit Civil Court on Wednesday after it found Mr McDonagh had breached the terms of a long-standing “oral tenancy agreement” with the plaintiffs, John and Mary Lyons, for a Supermac’s premises at Ennis Road, Limerick.

The plaintiff’s firm, Watchford Ltd, had also entered into an oral franchise agreement with the defendant’s company Supermac’s Ireland Ltd.

An annual rent of about €132,000 was agreed in March 1995, from which it was also agreed the defendant would discharge rates of about €22,000 to Limerick City Council.

Representing the plaintiffs, Sheila Finn told the court that Mr McDonagh stopped paying the rates for the Supermac’s premises in 2009. This resulted in the plaintiffs, as occupiers, being obliged to pay rates on top of the rent, totalling more than €154,647.

The court heard that a valuer for Mr McDonagh has estimated the current annual rent at about €196,000.

However, a valuer for John and Mary Lyons estimated the annual rent should be €86,000.

Ms Finn said her clients were willing to pay rates going forward. However, she argued they were entitled to “recover” losses after they had “overpaid”.

John Lyons gave evidence that the Supermac’s premises was “dilapidated”. He claimed the defendant had not upgraded the premises, despite asking him to do so on “numerous” occasions.

David McHugh, for the defendant, said Mr McDonagh had invested significantly in the premises.

Ms Lyons, who was present in court, was not called to give evidence.

Having considered two days of evidence, presiding judge Terry O’Sullivan said he was “more inclined” to agree with the plaintiff’s valuation of the rent.

He said the Lyonses’ obligation to pay rates would continue. However, the court ordered the rent be reduced by €7,000 to €125,000.

It ordered Mr McDonagh to reimburse the rates previously paid by the plaintiffs since 2009 by way of annual deductions to the new fixed rent at €125,000.

In light of the reduction of the annual rent, the court ordered Mr McDonagh refund the plaintiffs’ excess of rent of €19,000, paid by them since the proceedings were commenced in 2015.

In his summing up, the judge said: “There was clearly an overpayment.”

He said the plaintiffs were “entitled to a rebate”. They were “at a loss” after they “paid the rates”, he added.

He was “surprised” by the court’s decision to reduce the rent. “Look, at the end of the day [it] doesn’t make an awful lot of difference one way or the other.

“He [Mr Lyons] has done well out of it; we have done fairly well out of it. So, look, that’s just the way it is. The rent has been reduced and he [Mr Lyons] is now liable for the rates going forward. It’s probably an even-enough result, at the end of the day.”

There was no order for costs. Mr McDonagh has 10 days from the judgment date to lodge an appeal.

1 Ryanair and Eir the worst for customer service during Covid crisis
2 What to consider if older person or loved one needs care at home
3 ‘Essential’ retailers risk a firestorm if they exploit the closure of the ‘non-essential’
4 Fair deal? Family at odds with hospital and each other not so sure
5 Level 5 restrictions risk pushing economy into double-dip recession
6 Glenveagh attracts growing hedge-fund interest
7 Pension auto-enrolment looks unlikely in 2022
8 INM inspectors write to former directors in ‘inside information’ inquiry
9 Tinnitus group Neuromod raises €10.5m for expansion
10 PlanNet21 eyes further acquisitions after buying rival eCom
Real news has value SUBSCRIBE