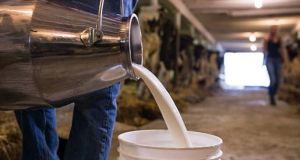 LacPatrick Dairies will issue non-disclosure agreements (NDAs) to four prospective bidders this week as the process to sell off or merge the Monaghan-based business intensifies.

The co-op is understood to be preparing documentation for Glanbia, Lakelands, Aurivo and Dale Farm, which have each expressed an interest in acquiring LacPatrick.

The issuing of NDAs will allow for formal talks with each party ahead of a bidding process, which is expected to take place this month, according to a well-placed source.

LacPatrick surprised the market last month by announcing it was seeking a strategic partner for the business amid a reversal in dairy prices internationally.

Chairman Andrew McConkey has insisted, however, the announcement was not being driven by a sudden change in the group’s financial position, which he said remained healthy.

The group is expected to publish full-year financial results in July.

LacPatrick suppliers are unhappy, however, with the price they are receiving for milk following consecutive price cuts in February and March.

A spokesman said that as a commercial sell-off or merger process had commenced, it would be inappropriate to comment.

Neighbouring Cavan-based Lakelands, which has a strong balance sheet, is viewed by many as the front-runner to acquire LacPatrick’s 600m litre milk pool.

However, Belfast-based processor Dale Farm, which ranks as the largest UK co-op, has also contacted LacPatrick to signal an interest in bidding, and it may appeal to its predominantly Northern Ireland farmer base. The group sources more than 80 per cent of its milk from the North.

Sligo-based Aurivo, formerly Connacht Gold, is thought to be a good match for the LacPatrick business as it has a similar product mix, but it will have to prove it has the financial firepower to undertake the transaction.

Kilkenny-based Glanbia is the biggest potential bidder, albeit co-op members are traditionally wary of the plcs and the likely terms that they might insist on.

LacPatrick recently increased its borrowing to invest in its business, including building a drier for powdered milk manufacture at Artigarvan, Co Tyrone, which cost €40 million. Its 2016 accounts show that bank debt grew by more than €13 million to €30 million, with the long-term element of this doubling to €16.9 million.