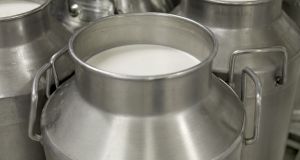 Carbery said it was able to pay a leading milk price to its supplier shareholders during 2017. Photograph: iStock

Ingredients company Carbery Group increased its pretax profit by almost 16 per cent to €24.2 million in 2017, its latest accounts show.

“Our dairy business performed well on the back of strong dairy markets and continuing growth in our milk supply,” Mr Hawkins said. It achieved “steady growth” in its cheese business, supported by its partnership with Ornua.

Brexit remained a “significant concern”, particularly for the cheese business, given the importance of the UK market for Irish cheddar. “We have a Brexit working team evaluating and preparing for all scenarios under either a soft or hard Brexit.”

Mr Hawkins said the nutritional ingredients side of the business, which includes a range of protein products, and Synergy, its taste division, also grew.

He said that as a result of very strong dairy markets and a good business performance, Carbery was able to continue to pay a leading milk price to its supplier shareholders during 2017.

Supplies of milk to Carbery’s processing facility in Ballineen increased 8.2 per cent to 509 million litres in 2017, and are up 28 per cent since the removal of quotas. Some €10 million was allocated to its stability fund at the end of 2017 to support future milk prices during times of price volatility.

“Dairy markets will prove more challenging for our dairy business and milk suppliers in 2018, particularly if EU supply growth continues at recent levels,” Mr Hawkins said, although he added that “longer-term dairy demand is healthy”.

During 2017 Carbery invested a further €17.1 million across its global operations, bringing investment in the business over the past five years to a total of €80 million. The company had net debt of €12.7 million as of the end of the year.