Pearse Street bakery and cafe aim for slice of the action 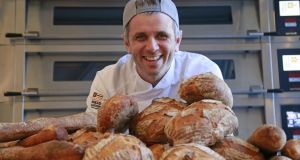 If the owners of a new bakery set to launch on Dublin’s Pearse Street were ever fearful that their concept might not take off, the recent experience shown during Storm Emma should have put them at ease.

The Irish, as we now know given the bread panic that set in as the snow fell, are obsessed with bread.

It served as added reassurance for Eoin Cluskey, the man behind a new bakery, and cafe, Bread Nation on Pearse Street.

Situated directly in front of Trinity College Dublin’s new business school under the Dart bridge, the bakery is hoping to “go back to basics” with its new business proposition, which promises “to create one of Ireland’s most beloved bakeries and cafes offering outstanding food delivered with signature warmth and hospitality” says Cluskey.

Flour will be ground on site in a stone mill, bread will be cooked in a large clay oven on the premises, switching to pizzas from 5pm.

So far Cluskey has started baking for the wholesale arm, Bread Nation, selling bread onto other distributors, including The Happy Pear, which has cafes in Greystones and Clondalkin. The cafe, Bread Nation, is pencilled in to launch in July.

Cluskey has a background in food – his grandmother ran a bakery in Dalkey, and after a period training in Ballymaloe and subsequently working in other restaurants , he settled into the Firehouse Bakery in Delgany, Co Wicklow. He’s joined in the new venture by Stephen McKenna, who is mainly immersed in travel as chief executive of Atlas Travel Services and Gohop.ie.

Together they hope to create “some of Ireland’s most beloved bakeries and cafes”.

The two were brought together by McKenna’s mother, a customer of Cluskey’s in Delgany. After McKenna acquired the building adjacent to his travel businesses on Pearse Street ,which will host the cafe, the duo set about creating a vision for the new outlet.

The new bakery and cafe have been self-funded, as a loan was difficult to secure despite McKenna’s track record with the other businesses.

“It was very frustrating,” he said. However, they did secure lease financing with AIB to acquire the equipment for the new venture.

For now the focus is on getting the bakery and cafe up and running, but if Dubliners’ love for real bread is as strong as their affection for the sliced pan, it could be the first of several outlets for Bread Nation.