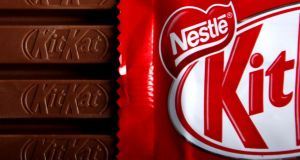 The shape of the four-finger KitKat bar is set to lose its EU-wide protected-trademark status after the European Court of Justice was instructed that the chocolate was not well enough known in Ireland and three other countries.

An appeal by Nestlé, the bar’s maker, against an earlier ruling should now be thrown out, the court’s advocate general advised judges sitting in the Luxembourg court.

The company had provided evidence that the chocolate was sufficiently well known only in Denmark, Germany, Spain, France, Italy, the Netherlands, Austria, Finland, Sweden and the UK, the advocate general, Melchior Wathelet, said. Belgium, Greece and Portugal joined Ireland as the countries for which Nestlé had not provided evidence.

For the trademark to be valid the KitKat would need to be recognised as distinctive across all the EU’s states, as had been ruled by the general court, the second highest in the EU, in 2016.

The decision by the advocate general, whose advice is not binding but is generally followed, means the KitKat shape will now be open to imitation by competitors.

It follows a decision by appeal judges in the UK in favour of stripping KitKat of its UK-only trademark on the basis that the three-dimensional shape of a chocolate product had “no inherent distinctiveness”.

The appeal court heard then that Nestlé had spent between €3 million and €12 million a year advertising and promoting KitKats between 1996 and 2007. More than 40 million were sold in Britain in 2010.

The legal skirmish in the European Court of Justice is part of a wider battle between Nestlé and Mondelez International, previously known as Cadbury Schweppes, which filed the original challenge to the EU trademark in 2007, a year after it had been granted. Nestlé, in turn, is challenging Mondelez’s British trademark for the shade of purple wrapper on its Cadbury Dairy Milk chocolate bars.

The EU intellectual-property office was said to have erred in law when it granted trademark status to the four-finger shape in 2006. Nestlé has not sought such a status for its two-finger bar.

A spokesman for Nestlé said the company believes Mr Wathelet’s final conclusion “is based on incorrect factual findings. Nestlé did submit sufficient evidence to prove acquired distinctiveness of its iconic KitKat four fingers shape to meet the advocate general’s proposed threshold, including in the few countries where evidence was challenged.”

Gaining trademark status for shapes has proven to be particularly challenging for companies. In 2016 the Rubik’s Cube lost a decade-long battle to secure trademark protection for its own distinctive character.

But Toblerone, which is owned by Mondelez, has successfully trademarked its “zigzag prism” shape. – Guardian

Joint accounts: if one of us dies, can the other access the money? 07:23
Oil rises on predictions that market may rebalance in June 07:03
Eason’s job cuts, ESB shelves Poolbeg generator, and Pubs v FBD in court 06:30
We are ‘sale agreed’, but can we go back with a lower offer? 05:45
Stocktake: Active fund managers fail to earn their keep 05:40

1 We are ‘sale agreed’, but can we go back with a lower offer?
2 Working from home: New costs, new stresses and little relief
3 HSBC board rethinks overhaul and seeks even deeper cuts
4 Joint accounts: if one of us dies, can the other access the money?
5 ESB shelves plan for €500m electricity generator at Poolbeg
6 Eason to lay off 150 staff as it prepares for June reopening
7 ‘Over 1,000’ pubs have interest in Covid-19 insurance test case
8 Oil rises on predictions that market may rebalance in June
9 Eason’s job cuts, ESB shelves Poolbeg generator, and Pubs v FBD in court
10 Covid-19 has turned the volume up on musicians’ cut from streaming
Real news has value SUBSCRIBE