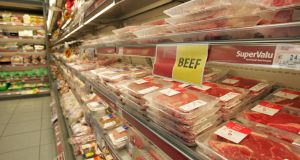 Last year was the strongest year on record for Irish meat exports, despite the Brexit-related uncertainty hanging over the State’s international food trade .

According to Bord Bia, meat exports last year were worth €3.8 billion and accounted for 30 per cent of all Irish food and drink exports.

Beef exports, some 50 per cent of which go to the UK, grew by 5 per cent to €2.5 billion, making beef the largest single component of the State’s food trade.

Poultry exports, meanwhile, rose by 3 per cent to €295 million while pigmeat exports jumped 14 per cent in value to €712 million, while lamb exports saw an increase of 12 per cent to €274 million.

The latest numbers were driven by strong performances in the UK and other international markets, and generally robust performances across continental Europe. Bord Bia said the UK figures were noteworthy given the slippage in sterling since 2016.

Speaking at the agency’s annual meat marketing seminar in Co Kildare, chief executive Tara McCarthy said:“Developments such as increased market access this year, set alongside trade figures, can leave us in no doubt about our meat industry’s ability to be competitive globally.”

“Population growth, growing consumer affluence and greater demand for meat are creating a long-term opportunity for us, while Bord Bia’s commitments to quality, sustainability and consumer insight mean we’ve never been better placed to capitalise on them.”

“Bord Bia is working strategically with the industry to anticipate and respond to the new market realities when faced with Brexit and other challenges,” she said.