Toast the first whiskey produced in Connacht for 100 years

Leitrim distillery to produce 250,000 litres a year once fully operational 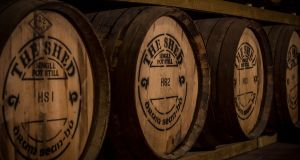 The Shed distillery is opening a €1.5m visitor centre in 2018, which will see staff numbers almost double

The first whiskey produced in Connacht in over 100 years comes of age this week, with a large number of early casks already pre-sold to buyers who include Prince Albert of Monaco.

Serial entrepreneur PJ Rigney said The Shed distillery in Drumshanbo, Co Leitrim, intended to produce about 250,000 litres of whiskey a year once fully up and running. The first cask is currently valued at about €100,000.

Three years is the minimum maturation period for the spirit, and this week marks the third anniversary of the whiskey first being distilled at The Shed, which opened in December 2014.

The first cask will be briefly opened for a tasting this Thursday, but then put back into hibernation for a few more years.

The distillery has already tasted success with the award-winning handcrafted Drumshanbo Gunpowder Irish Gin, which went on sale last June and is currently available in 12 markets.

“We are still very traditional but we want to bring something new to great recipes to produce real premier grand cru-style Irish whiskey. Everything is done by hand. This is very boutique and very top end,” said Mr Rigney.

“At The Shed we taking traditional recipes but introducing new elements such as adding organic oats and rye. In addition, we’re experimenting in terms of maturation so that it isn’t just done in bourbon casks. We’re also trying out pinot noir, marsala and sherry.”

The distillery is opening a new €1.5 million visitor centre in 2018, which will see staff numbers almost double. Planning permission for the centre was granted in March. The Shed intends to increase headcount from 18 to at least 30 people when the facility officially opens.

Mr Rigney is an industry veteran with more than 30 years’ experience in the drinks sector. Having previously worked in lead roles at Gilbey’s, C&C and Baileys, he is credited with having introduced a number of spirit brands, including Sheridan liqueur and Boru Vodka. The latter came via the Roaring Water Bay Spirits Company, which later merged with Great Spirits to form Castle Brands.

Mr Rigney is also co-founder of the Dalcassian Wines and Spirits distribution company, and an investor in the Walsh Distillery in Co Carlow, which opened last year.