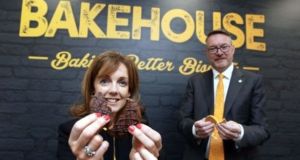 East Coast Bakehouse, the Co Louth-based biscuit business founded by Michael Carey and Alison Cowzer, has just made its first inroads into Africa as it continues to look beyond the UK for future growth.

Mr Carey told The Irish Times the company was expanding into a number of markets currently but still intended to be a major player in the UK as well.

East Coast Bakehouse, which was established by the former management team of the Jacob Fruitfield Group in 2015, has invested close to €20 million to set up a factory to produce high-end biscuits in Drogheda.

It initially intended to build its business by securing revenues in the UK, both through launching its own brands into the market and by bidding for retail private label contracts of grocery retailers. However, following the Brexit vote, which took place the same month the company started trading, it began to look at other markets for growth.

“We have continued to export into the UK but we’ve widened out to the US where we now have two retail brand listings, into a couple of European markets and into the Middle East and even Africa, where we’ve just shipped our first order,” Mr Carey said.

“Those were all activities we expected to pursue in years three and four of our initial strategy but in the context of Brexit we felt the need to broaden our footprint more quickly.”

“Obviously our progress was slowed down initially due to Brexit and our having to pivot in response to that but we continue be as optimistic as we were at the outset about the scale of opportunity that exists and are on track to achieve great success,” he said.

East Coast’s factory, which is the largest individual biscuit production line in Europe, with a capacity to produce €30 million of biscuits, is now fully up and running. Mr Carey, who is also the outgoing chairman of Bord Bia, said the company employs 40 people but intends to take on more as production increases and revenues grow.

“From this quarter on we’ll be running a full day shift in the plant and we intend to grow to have second and third shifts in the future leading to further jobs,” he said.

“The UK will continue to be a big market for us in the years ahead and we’re busy working on a lot of premium products such as sugar-free and high protein ones for that and other markets,” Mr Carey added.

The biscuit maker has increased the number of products it produces since it was established from four to 10 and Mr Carey said there was plenty more room for additional products in the future.