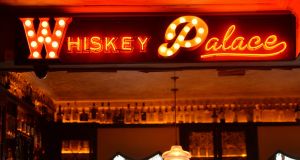 The Whiskey Palace in the Palace Bar on Dublin’s Fleet Street, which is seeking to capitalise on the strong growth in sales of the spirit. Photograph: Alan Betson / The Irish Times

Irish whiskey led strong growth in the value of spirits exports from the Republic to almost €650 million, industry figures show.

A new analysis of the drinks industry from the Alcohol Beverage Federation of Ireland shows that the sector exports €1.1 billion a year to 130 countries.

Released on Wednesday, the report shows that the value of all spirits exports from the Republic grew 13.3 per cent to €646 million in the first three quarters of 2017.

Whiskey led the way, accounting for €412 million of the total during the nine-month period, an increase of 14 per cent.

The federation’s numbers also indicate that Irish cream liqueurs have reversed a decline in growth between 2012 and 2016, when domestic sales fell 11.2 per cent.

Preliminary figures from market research specialist Nielsen show that the value of cream liqueur sales from off-licences, a key outlet for the tipple, rose 3.4 per cent this year.

The body says the drinks industry pays wages of €4.3 billion a year to 204,000 workers in production and distribution, and in the pubs, restaurants and off-licences where its products are sold. Those jobs are across every county in the Republic.

The sector also supports 12,000 farm families through its purchase of €1 billion worth of grain every year.

Ms Callan argued that labelling and advertising rules in the Public Health (Alcohol) Bill will hit new investment by global players and make it impossible for small brewers and distillers to establish their brands.

“In essence, the alcohol Bill in its current form will deter innovation as companies, both large and small, will be constrained from bringing new products to the Irish market,” she said.

She noted that Brexit could threaten a regime under which both the Irish and UK governments enforce laws ensuring that Irish whiskey, cream liqueurs and poitín can only be produced on the island of Ireland.

“Thirdly, Ireland has the second highest rage of excise in the EU,” she said. “This continues to put the industry [in Ireland] in an uncompetitive position.

“We hope to work with the Government on these issues in 2018 to ensure growth is sustained,” Ms Callan added.