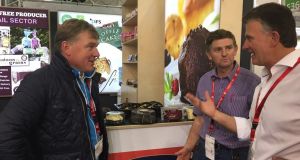 A bakery based in Bandon, Co Cork, has invested in a product development centre as it attempts to grow its export business by wooing foreign supermarkets.

Coolmore Foods has established a €200,000 product development centre, having identified the demand from retailers for new products.

The investment comes after the company recently signed a deal with German-discounter Norma, which is estimated to be worth about €800,000 a year to the company.

“They’re very good retailers to deal with,” said Shea O’Dwyer, the founder and managing director of Coolmore. He noted that although margins can be tight when selling to discounters, because of the large volumes the company achieves economies of scale.

The expansion into Germany is a post-Brexit bid to widen the company’s European customer base. Although continental Europe already accounts for about 55 per cent of the company’s sales. The remainder of Coolmore’s products are sold in Ireland and Britain.

Its biggest European markets at present are Holland, Austria, Denmark and Sweden, according to Mr O’Dwyer, who said the company targeted one or two big retailers in each of its export markets.

Coolmore, now owned by Lisavaird co-op, was established in 1988 and run by Mr O’Dwyer’s late wife, Thecla. Originally, the cakes and muffins were baked in the couple’s domestic Aga cooker and sold to local shops and restaurants. As the company grew it began selling its product range to the larger Irish retail chains, targeting the “premium” cake market.

That premium market, according to Mr O’Dwyer, is starting to take off in Germany. He noted that people are “spending more on good-quality products”, and although a typical chocolate cake in Germany would sell for €1.49, Coolmore looks to sell nearer to the €2.99 mark. That, he said, is becoming more possible as disposable incomes grow.

Following the sale of the company in 2014, Lisavaird “invested heavily in both people and new machinery to help Coolmore meet the challenges that lie ahead”.

Those challenges include Brexit, although Mr O’Dwyer said the company is now scoping out new opportunities in the Middle East.

The company, which had a turnover of around €6 million last year, hopes to grow by around 10 per cent each year.

1 Bank leaked my loan request to family who tried to rip me off
2 Ryanair and Aer Lingus monitor impact of coronavirus on travel to Italy
3 Mastercard to create 1,200 new jobs by expanding base in Dublin
4 Boris Johnson's new immigration regime will damage much more than industry
5 Varadkar resigns amid warning impasse will hit the economy
6 Help, I’ve no PRSI stamps – can I still get a pension?
7 Google completes purchase of Treasury Building for €120m
8 Exposed to coronavirus: How Irish business is coping with fallout
9 A maverick taking on the Irish whiskey establishment
10 How to . . . move (almost) everything to your new phone
Real news has value SUBSCRIBE