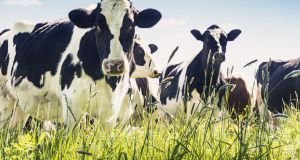 Irish data scientists have developed an image recognition algorithm that will save vets and farmers considerable time and money in identifying parasites in their herds.

The algorithm, which uses machine learning and has a 95 per cent accuracy rate in identifying evidence of parasitic infection in herds, has been created by data scientists at the Irish Centre for High End Computing (ICHEC) in partnership with Kilkenny-based start-up Telenostic.

It has been designed for use in a device created by Telenostic for use by veterinarians. The device allows images to be captured digitally with possible infections quickly identified via image-recognition technology.

“With the device, vets will be able to take a costly and time-consuming activity and turn it into a routine in-house check supporting the ethical treatment of parasitic infection,” said Telenostic chief technology officer Eamonn Power.

“We see this as changing the economics of parasitic treatment for the better, not only nationally but globally,” he added.

ICHEC’s senior data scientist Dr Bruno Voisin said that, normally, it is specialists in labs looking at samples through microscopes who recognise parasites.

“The process takes a while and can cost a lot of money,” he said. “The algorithm we have developed allows for this to be automated and for treatment decisions to be quickly made to prevent infection from spreading.”

Telenostic is a spin-off from Kilkenny-based animal feed supplement manufacturer CF Pharma, which was established by entrepreneur Clare Hughes.

The start-up has been set up specifically to bring the parasitic infection device to market.

The company’s work on deep learning to predict parasitic infections in animals was named best application of artificial intelligence in a start-up at the 2019 AI Awards, held in November.

“Some €275 million is currently spent on faecal egg counts as a veterinary parasite test each year,” Mr Power said, “ while the cost of parasitic infection goes into the billions.”

Telenostic, he said, is in the final stages of preparing its device for manufacturing with the product expected to come to market soon.