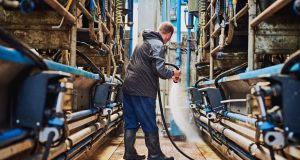 Even with CAP payments, farm income levels in the North “fell by 26 per cent in real terms” from £386m in 2018 to £290m in 2019, according to the North’s Department of Agriculture. Photograph: iStock

Farm businesses in the North need the UK government to provide them with at least £300 million (€357m) a year to replace the funding they will lose after Brexit, farming leaders in Northern Ireland have warned.

It is estimated that the majority of farm businesses in the North have up to this month relied on CAP payments for more than 60 per cent of their total farm income each year.

Ivor Ferguson, president of the Ulster Farmers’ Union, said that without this continued level of financial subsidy many farming families in the North would struggle.

According to Mr Ferguson, the CAP payments were not universally liked by all farmers in the North because they favoured some sectors over others. However for many farm businesses they were a vital source of income.

Mr Ferguson said:”Farmers cannot afford any drop in financial support, and in fact they may need extra funding because farmers could find themselves facing extra costs depending on what comes out of Boris Johnson’s trade deal.

“Remember more than 50 per cent of everything we produce in Northern Ireland goes to the GB market, but will unfettered access mean extra costs? Farmers are also very worried about potential trade deals between the UK and for example the United States or Australia that could result in an influx of lower quality cheaper food, and we just couldn’t compete with that.”

He said the farming community in the North expected “big changes” over the next 11 months because of Brexit, and the lack of clarity on future financial support was a big concern.

5 Buy a property with your pension? Government says no