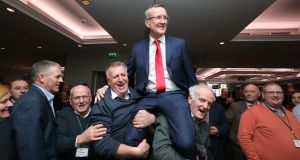 The new president-elect of the Irish Farmers’ Association has promised that securing improved beef prices for farmers will be his number-one priority.

Tim Cullinan, a pig farmer from Toomevara, Co Tipperary, was elected the 16th president of the country’s largest farming organisation on Tuesday evening in Dublin.

Mr Cullinan, who is the IFA’s treasurer, emerged victorious following a count of almost 23,000 votes from 944 IFA branches countrywide.

Addressing a large number of farmers at the count centre in a Dublin hotel, Mr Cullinan – who will replace outgoing IFA president Joe Healy in January – said Irish farming was facing an unprecedented crisis with challenges on many fronts.

The IFA president-elect said he had run a campaign promising change and the popular vote of members could be interpreted as sharing that view.

“It’s a sentiment I picked up right across the country which I now fully intend to deliver on,” said Mr Cullinan.

He promised his presidency would be “a lot more about action than about words”. And while he preferred to negotiate a settlement to problems, Mr Cullinan said he was not afraid of direct action.

He claimed the current beef crisis had been ongoing for 18 months and farmers need to be paid “a fair share of income – no matter what that takes”.

“Enough is enough” is the message that needed to be sent out to all those “with their hands in farmers’ pockets”, he added.

Other issues which would also need to be addressed were the Cap budget reform and environmental restrictions faced by farmers, said Mr Cullinan. He described himself as “the proudest man in Ireland” after emerging the winner in an election which he branded “a cliffhanger”.

With 8,334 votes, he led nearest rival John Coughlan, a dairy farmer from Cork, by 932 votes after the first count which meant the third candidate, Angus Woods, a sheep farmer from Wicklow, was eliminated with his total of 7, 149. The distribution of Mr Woods’ vote enabled Mr Cullinan to extend his lead, securing a final total of 11,497 votes compared to 9,937 for Mr Coughlan.

In addition to his native Tipperary, Mr Cullinan also secured strong backing from farmers in Clare, Offaly, Cavan and Roscommon.

Apart from his main priority of tackling the beef crisis in farming, he said he would be devoting considerable attention to bringing “change, energy and fight” to the IFA.

With approximately 32 per cent of the IFA’s 72,000 membership voting in the presidential election, it represented one of the lowest turnouts recorded in recent years.

Mr Cullinane acknowledged the organisation needed change “to get the IFA back to its rightful place as the strongest farming representative body in Ireland”.

He said he intended to reunite farmers as the only winners when the membership was in-fighting were the people it opposed.

The new leader of the country’s largest farming organisation has certainly adopted the winning formula of other recent election winners in choosing an ear-catching slogan.

Tipperary pig farmer Tim Cullinan caught the mood of the farming community with his promise of “putting the fight back into farming”.

The new IFA president has a long history in the organisation and before his stint as national treasurer he had served as chairman of its pig committee and chairman of North Tipperary IFA.

With his election on Tuesday, he becomes the fourth president from Tipperary.

He will receive an annual salary of €120,000 during his two-year term of office after which he can seek re-election for an additional term.

The 59-year-old married father of two who runs his family’s pig farm in Toomevara, Co Tipperary, has been involved in farming for more than 40 years.

At the outset of the election he was regarded as an outsider by some, including bookmaker Paddy Power, although betting on the contest was subsequently suspended by the betting company when the money came for him.

His campaign promise to be unwavering in defence of farmers and their livelihoods played well with members countrywide in a series of 17 debates with rival candidates over the previous two months.

While he will not take over office formally from outgoing IFA president Joe Healy until the association’s annual general meeting in January, there will be little prospect of him enjoying a honeymoon period. Tensions in the agriculture sector are at their most heightened in many years due to falling farm incomes.

Farmers engaged in a high-profile campaign on beef prices that shows no immediate sign of resolution combined with the emergence of a new campaign group, Beef Plan Movement, mean the president-elect will face myriad challenges.

His election promise of having “a lot more action than words” should ensure an interesting days ahead for farmers.